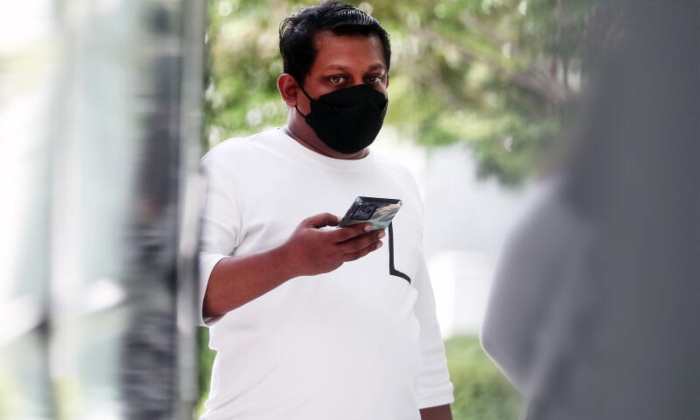 A 74-year-old woman fell and fractured her shoulder after her umbrella got hooked on the power-assisted bicycle (PAB) of a man who was riding illegally on the footpath.

S. Davanand, 33, a part-time Deliveroo rider at the time, was sentenced in court on Thursday (May 19) to four days' jail.

He had pleaded guilty to one charge of causing hurt by performing a rash act that endangers the personal safety of others. Another charge over riding his PAB on a footpath was taken into consideration during his sentencing.

Under the law, PABs, also known as e-bikes, can be ridden only on roads and cycling paths.

Deputy Public Prosecutor Kenny Yang told the court the victim was walking along the footpath at Lorong 1 Toa Payoh at about 1.25pm on March 30, 2020, to pick up her granddaughter from CHIJ Primary Toa Payoh.

Davanand was riding his PAB, which weighed 20.05 kg, on the footpath in the opposite direction. The bicycle was above the maximum permissible weight of 20kg.

DPP Yang said Davanand knew he was not supposed to ride a PAB on a footpath and was also aware of high pedestrian traffic on the footpath as a number of people were picking up children from the school.

"Notwithstanding this, he continued riding his PAB on the said footpath," DPP Yang added.

After the victim's umbrella got hooked on the bicycle, she fell and her jaw and right shoulder hit the ground. She was dragged along the footpath for a short distance.

"The collision occurred so quickly that the victim did not know that she had been hit," said DPP Yang.

An X-ray scan revealed a shoulder fracture, and the woman underwent surgery on April 7.

Her medical bills amounted to $17,246 and she was reimbursed $8,697 by her insurer and $8,000 by Deliveroo. Davanand compensated her the rest of her medical expenses on April 26 this year.

DPP Yang called for Davanand to be jailed for a few days to a week, citing in his written sentencing submissions the need to deter like-minded individuals from such callousness.

Davanand's lawyer, Mr Ashvin Hariharan, asked for a jail sentence of three to four days, noting that his client had helped the woman after the accident and had shown genuine remorse.

He also said the PAB's motor was not running at the time of the accident.

For causing hurt by committing a rash act, Davanand could have been jailed for up to a year and fined up to $5,000.