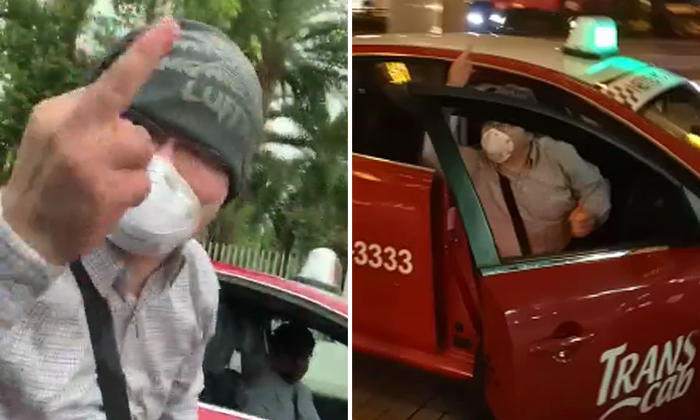 Police have identified a 42-year-old taxi driver who was caught on camera punching a driver's car window and being verbally abusive towards a couple in two separate disputes.

Several Stompers alerted Stomp to videos of the two incidents that have gone viral online.

In the first video, the Trans-Cab driver, who is wearing a mask, can be seen repeatedly flashing his middle finger at a motorist.

Besides using his fist and elbow to hit the latter's car, he also kicks it.

The cabby can be heard repeatedly telling the car driver to come out of his vehicle and even tries to open the car door himself.

In the second video, the same masked cabby appears to be in a dispute with a man and a woman who was carrying a child.

A man, who was filming the incident and had apparently intervened, can be heard saying: "You got weapon sia on you."

In response to a Stomp query, the police said: "The police have established the identity of the 42-year-old male taxi driver involved in a case of road rage along Paterson Hill on 22 November 2019, and a case of criminal intimidation and voluntarily causing hurt at 14 Scotts Road on 24 November 2019, as revealed in two videos circulating online."

A spokesman for Trans-Cab told Stomp: "The company had taken back the taxi on Nov 27 due to another service offence whereby the driver refuse to cooperate with us before the video footage started to circulate."