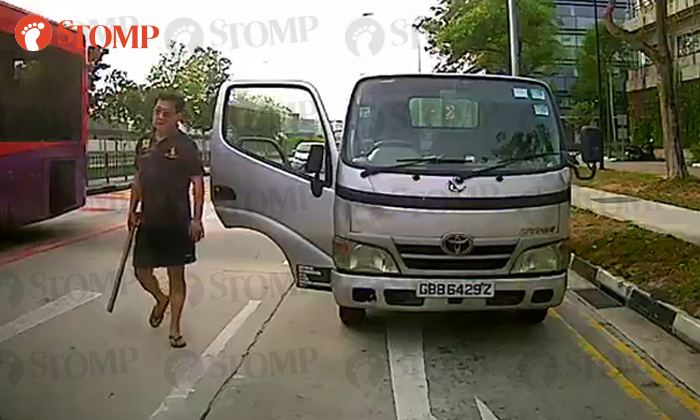 Police are investigating are a road rage dispute that saw a lorry driver retrieving a wooden plank from his vehicle after he allegedly challenged Stomper JK to a fight, a spokesman told Stomp.

The incident occurred along Tampines Central 1 on Saturday (Oct 19), at around 8.34am.

JK said he was turning into Tampines Concourse when a lorry, with the licence plate GBB6429Z, abruptly cut in front of his car, causing him to apply his emergency brakes.

He told Stomp: "Upon reaching the next traffic junction at Tampines Avenue 8, I got off my car to check on it. Shortly afterwards, the lorry came up from behind.

"The lorry driver opened his door, shouted Hokkien vulgarities at me and even said, 'Drive into the wrong lane cannot ah?'

"I replied him, 'Sure, but at least be apologetic,' and went back into my car."

However, the lorry driver went up to the driver's side of JK's car.

The Stomper added: "He challenged me to a fight and asked me to come out from my car. I ignored him and continued waiting for the traffic light to turn green.

"He then walked back to his lorry and came back with a wooden plank that was around 1m-long.

"He challenged me once again but I did not want to engage him and drove off when the traffic light turned green."

Audioless dashcam footage contributed by JK shows the lorry driver retrieving a wooden plank from his vehicle and approaching the Stomper while holding it.

He can be seen walking back to his lorry with the wooden plank afterwards.

JK made a police report later that afternoon.