Man stops car in middle of the road to 'block' driver, scolds him and flashes middle finger 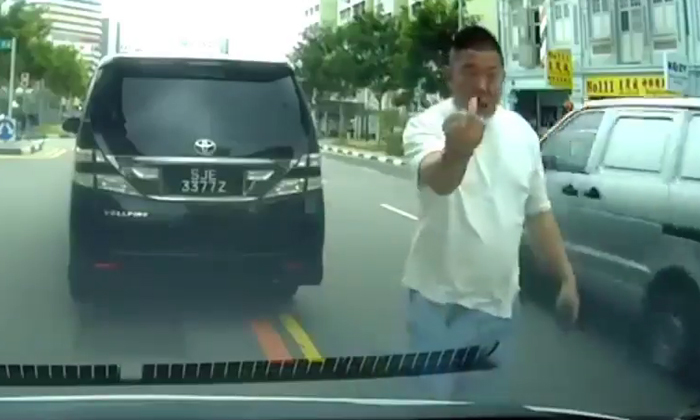 A man was caught on camera stopping his car in the middle of the road after cutting in front of another motorist, just so that he could let off some steam.

According to Facebook page SG Road Vigilante which posted a video of the incident, this occurred in Jalan Besar last Thursday (Nov 21).

In the video, a Toyota driver can be seen travelling behind a motorist.

The Toyota driver then overtook the motorist and cut in front of him.

Rather than simply continuing on his way, the Toyota driver stopped his vehicle in the middle of the road and got down to confront the motorist.

The Toyota driver can be seen flashing his middle finger, pointing at the motorist aggressively as well as making various hand gestures.

However, his remarks cannot be heard due to the audioless nature of the video.

In the Facebook post, a caption accompanying the video asked for the other side of the story and said: "Let us know what cam car did that made you so upset that you decided blocked cam car (sic)."

Although many netizens slammed the Toyota driver and called for enforcement action to be taken against him, a few took a neutral stand and called out the motorist too.

Another said: "Both ego shit... hellow both of u on red line ley. TP fine both pls. Blocking bus lane (sic)."