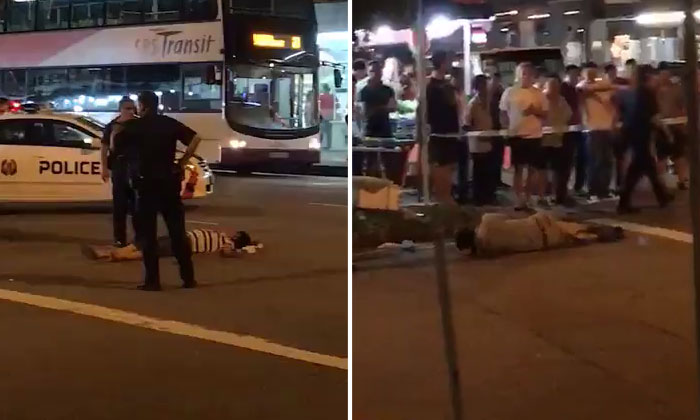 Six men, aged between 24 and 35, were arrested for their suspected involvement in a case of rioting that occurred on Aug 12.

The police said they received a report at 9.48pm that day, informing of a fight along Sims Avenue.

Preliminary investigations revealed that a group of people assaulted two men after an altercation following a traffic accident. The group then fled the scene in a van.

A video of the incident was posted on Shin Min Daily News's Facebook page showing two men lying motionless on the road.

Police officers are on the scene and several bystanders look on from behind police tape set up cordoning off the area.

The men's identities were established through ground enquiries by officers from Bedok Police Division, Central Police Division and Criminal Investigation Department, as well as with the aid of images from police cameras.

Within an hour of the report, the suspects were nabbed.

Four of them will be charged in court on Tuesday (Aug 14) with rioting, while investigations against the remaining two men are ongoing.

Anyone convicted for the offence of rioting shall be punished with a jail term of up to seven years and caning.