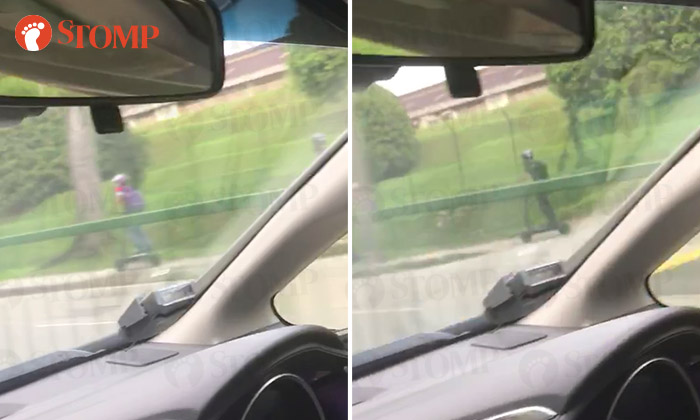 Many personal mobility device (PMD) riders have been caught flouting the rules even though e-scooters have been banned from footpaths since Nov 5.

Ellie was on her way home with her father when she noticed a group of PMD riders travelling along a pavement at 31 Jalan Bumbong.

"My dad was driving and when I saw these PMD riders, all I thought was that they're very daring."

Stomper Melvin, who previously recorded a PMD rider going against traffic, said: "I saw these videos of PMD riders on roads circulating on social media."

Melvin added: "These PMD riders pose a risk to motorists. It's a huge problem.

"If enforcement efforts aren't enough then maybe PMDs should be banned altogether, just like how chewing gum was banned so we don't have to worry about them.

"I've had many experiences where I'm driving and I see these PMD riders riding like nobody's business, breaking traffic rules, and more.

"They're supposed to stop at the red light but no, they just ride ahead.

"Fortunately, I haven't had any confrontation with these PMD riders. I don't like to look for trouble but it's a safety concern.

"If I see them on the roads, I will honk at them so they'll hopefully get a hint that they're not supposed to be there.

"They endanger the lives of motorists even more at controlled junctions.

"I think enforcement efforts need to be stepped up. If this is not possible, then banning them for good will be beneficial to everyone.

"Ban them totally, not just restrict where they can ride on.

"There wasn't such a problem in the past. I don't know who allowed for these PMDs to be around."

According to the Land Transport Authority (LTA), non-motorised PMDS, bicycles and personal mobility aids are allowed on footpaths.

PMDs like e-bikes, e-scooters are allowed to travel on cycling paths and park connectors.

Members of the public are encouraged to report these errant PMD riders via the MyTransport application.