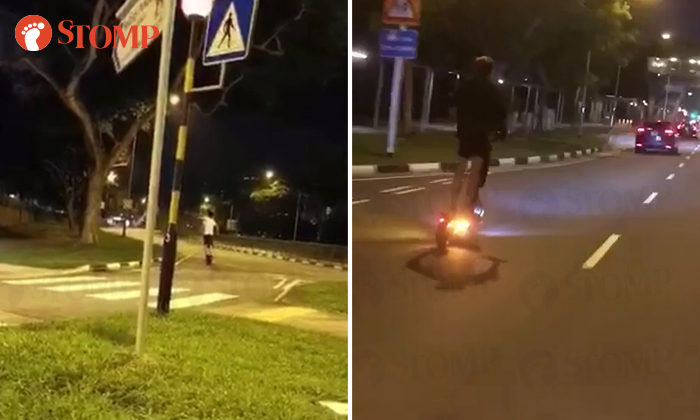 Two guys were filmed riding their personal mobility devices (PMD) on the roads in Sengkang.

A Stomper contributed videos of the two PMD riders he saw on two separate instances.

The first PMD rider was spotted along Sengkang East Avenue at about 4.35am on Friday (Nov 29).

The Stomper said: "I saw this PMD rider when I was in a taxi and on the way to work."

The second PMD rider was seen riding along Sengkang West Avenue at about 7.30pm on Tuesday (Dec 3).

In the video, the PMD rider can be seen riding along the side of the road and cutting into a taxi's lane.

The Stomper said to Stomp: "My friend was riding his motorcycle and I was sitting behind him.

"We were on the way home and we saw this PMD rider turn onto Fernvale Road.

"I find this to be very dangerous."

E-scooters have been banned from footpaths ever since Nov 5.

According to the Land Transport Authority, this ban will be extended to other motorised PMDs by the first quarter of 2020.

Related Stories
Man 'punches' BMW while riding PMD on road: 'Stay in your place, don't need to educate me'
Cyclist and e-scooter rider try to avoid accident on Woodlands park connector -- but end up colliding
PMD rider honks at pedestrian and scolds him for not giving way: 'We must share the path'
More About:
pmd
e-scooter
Sengkang