Man 'punches' BMW while riding PMD on road: 'Stay in your place, don't need to educate me' 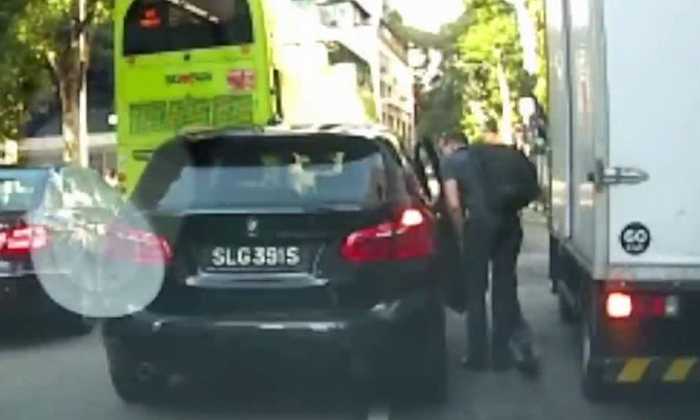 A personal mobility device (PMD) rider and a BMW car driver recently got into a dispute after the former had apparently punched the BMW when he was riding on a road.

According to the video, the incident occurred at about 8.45am on Thursday (Nov 28) along Enggor Street in Tanjong Pagar.

The video was published on Facebook page SG Road Vigilante, where it has since garnered over 80 shares.

The driver can be seen driving along Enggor Street where the PMD rider is riding along the rightmost lane.

The driver passes the PMD rider and a 'bang' can be heard.

"Wake up," the PMD rider says.

The driver replies: "What's wrong with you? This is a road for motor vehicles, not for e-scooter.

The video also shows the driver swinging the car door, which slams into the PMD rider's face.

The PMD rider can be seen opening the door and reaching into the driver's seat.

According to the Facebook post, the driver had opened the door to check on his car but the PMD rider immediately grabbed his neck and choked him.

The caption said: "I asked what is he doing and demand him to let go, he let me go after the uncles around the loading and unloading bay came helping."

When the PMD rider asks the driver if he wants to step out from his car, the driver replies: "No, why should I come down. I don't want to get into any fight with you all right."

At one point in the video, the PMD rider can be heard saying: "I'm f****** tired of Singaporean drivers that behave like f****** bullshit."

He also mentions to the driver: "You need to stay your place and you don't need to educate me."

Related Stories
Cyclist and e-scooter rider try to avoid accident on Woodlands park connector -- but end up colliding
PMD rider honks at pedestrian and scolds him for not giving way: 'We must share the path'
Masked PMD rider confronts couple and accuses them of 'staring' at him at Bishan bus stop
More About:
pmd
dispute
road rage