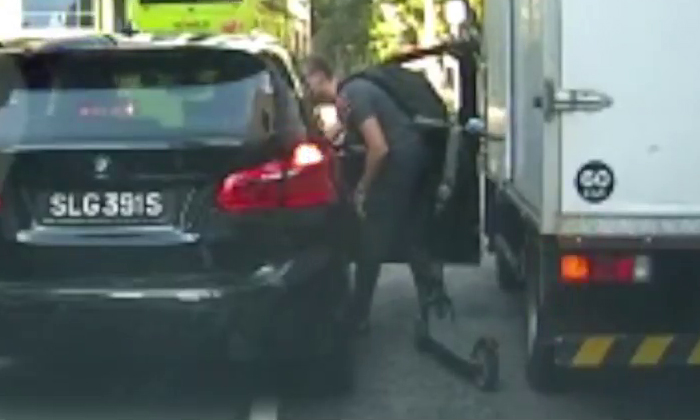 A personal mobility device (PMD) rider and a BMW driver who were caught on camera having an altercation in Tanjong Pagar have both been arrested.

Several Stompers had earlier shared a video of the incident that occurred along Enggor Street on Thursday morning (Nov 28).

In a statement, the police said they have arrested the 43-year-old car driver and the 36-year-old PMD rider on Nov 30 and Dec 1 respectively for their suspected involvement in a case of rash act.

The police confirmed that they had received a report about the traffic accident, adding: "The driver and PMD rider argued and acted aggressively to each other before parting ways."

Anyone convicted for the offence of rash act is liable to a jail term of up to six months and/or a fine of up to $2,500.

In their statement, the police also reminded all road users to observe proper traffic rules and not to take the law into their own hands.

Anyone with information regarding an alleged traffic violation can lodge a report at the nearest neighbourhood police centre or provide the information to the Traffic Police Department via the online "Feedback on Road Users" portal.

Related Stories
Man 'punches' BMW while riding PMD on road: 'Stay in your place, don't need to educate me'
PMD rider honks at pedestrian and scolds him for not giving way: 'We must share the path'
Masked PMD rider confronts couple and accuses them of 'staring' at him at Bishan bus stop
More About:
pmd
dispute
road rage