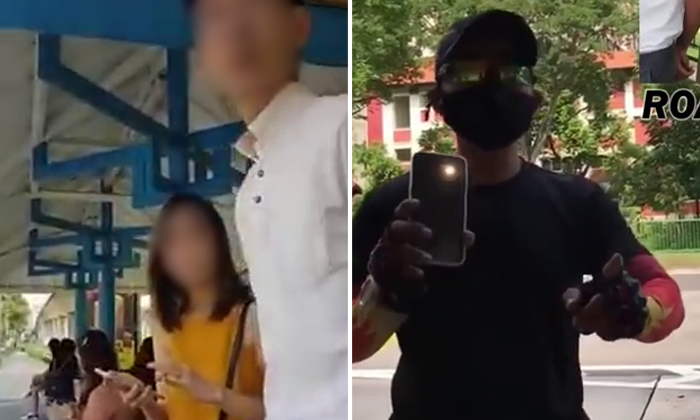 The rider of a personal mobility device (PMD) was caught on camera hassling a couple at a bus stop along Bishan Road for supposedly staring at him despite them denying doing so.

Several Stompers alerted Stomp to a video of the Nov 14 incident that was uploaded by Facebook page SG Road Vigilante.

The video starts off with the PMD rider approaching a man and a woman at the bus stop and saying: "Hi, hi, can I check with you... did I did anything wrong? The way you stare at me like one kind."

The couple, both with visibly perplexed expressions, are heard denying this multiple times.

However, the PMD rider continued saying: "I know the regulation about this pavement. This is regarding about me and LTA. If you are not happy or what ah, is none of your business."

Even though the man repeatedly told the PMD rider: "I did not say anything, brother", the latter continued his tirade.

The man replied: "I never talk to you ah. I never say anything. You don't..."

This led to PMD rider to ask the man if he wanted to call the police.

The man insisted that he did not do or say anything, adding: "You do your job. I walk my way. That's it. I never stop you or whatever, right? Now you try to do what, I don't know. But me, I walk to take the bus, that's it."

However, the PMD rider continued his rant even when the couple started walking away to board their bus.

"Eh, this is not up to you all you know. This is up to LTA. You want to viral right, this video. Go ahead ah, send to me ah ok. Here got police camera you know, " he is heard telling the couple.

Another video showing the PMD rider, believed to have been captured by the woman, was subsequently shared by ROADS.sg on its website.

This video reveals the PMD rider to be wearing a mask and using his phone to film the couple.

The rider is then seen walking back to his PMD and telling a elderly man, who was passing by, about the encounter.

Related Stories
Grab investigating incident of man confronting delivery guy for allegedly speeding on PMD
Audi couple share car cam video of collision with teen cyclist and their side of the story
Cyclist confronts pedestrian who caused woman to fall off her bike and walked away without helping
More About:
dispute
pmd
PMDs
rude