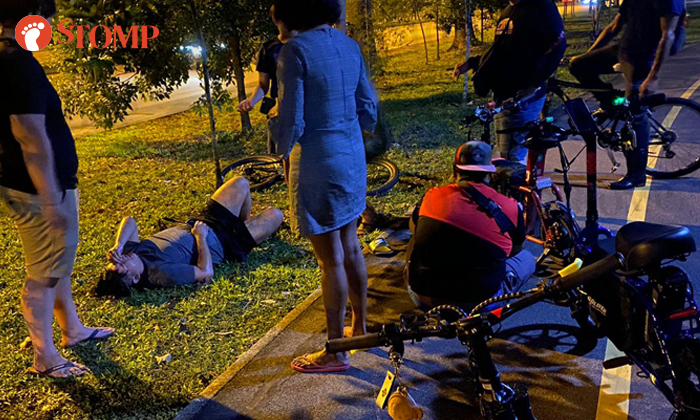 A cyclist was taken to hospital after getting into an accident with a personal mobility device (PMD) rider along a park connector in Woodlands on Tuesday night (Nov 26).

The incident occurred along Woodlands Avenue 12 at around 10.40pm.

Stomper Andy Lee, who had been jogging along the path and taken a photo of the accident's aftermath, identified the PMD as an e-scooter.

He recounted: "The PMD rider was definitely speeding because he zipped past me. It was registered as it had an Identification Plate with the number on it.

"I then heard a loud crash."

Andy Lee realised that a collision had occurred when he saw the cyclist lying on the grass patch.

Stomp understands that it was dark at the time of the incident and both parties had tried avoiding each other, only to end up crashing.

Andy Lee added: "The cyclist was bleeding from the forehead but the PMD rider seemed fine.

"I called the ambulance even though the PMD rider didn't want me to because he was afraid of getting into trouble."

The Singapore Civil Defence Force told Stomp that it responded to a call for assistance at around 11.15pm and conveyed one person to Khoo Teck Puat Hospital.