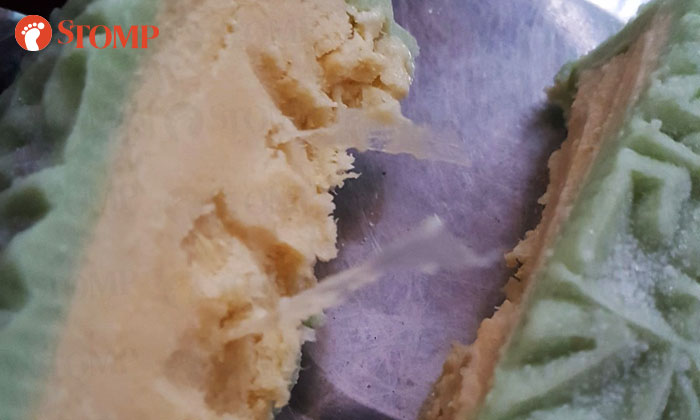 Local restaurant Peony Jade has issued a refund and launched an investigation after a Stomper purportedly found plastic strips in a mooncake he bought.

In a telephone interview, the customer told Stomp that he had purchased four premium 'mao shan wang' durian mooncakes for $72 from a Peony Jade booth at Junction 8 on Sep 25.

The next morning, he cut one of the mooncakes as he wanted to consume it for breakfast.

After he did so, he reported seeing two clear plastic strips embedded inside the filling of the bakery product.

He then reached out to Stomp and Peony Jade to share his experience.

The Stomper is of the opinion that an investigation is necessary as other customers might have purchased mooncakes from the same the production batch.

In response to a Stomp query, a spokesman for Peony Jade said that they have apologised to the Stomper and issued him a refund on Oct 9.

An investigation into the incident has also been launched.

"We have replied, apologised, followed-up and refunded the entire amount to him today (Oct 9) whilst the internal investigation and audit continue.

"Our client - Peony Jade - conducts its business with honesty, pride and integrity, they do not take product-centric feedback lightly.

"It is my client’s error and they are taking steps to identify the point of placement so similar incidents do not take place again."