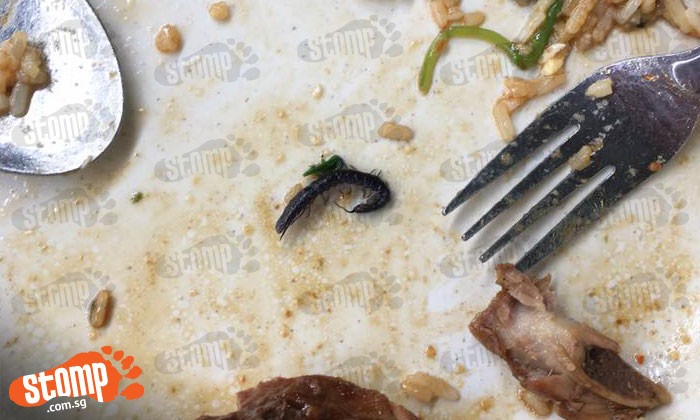 The students of Singapore University of Technology and Design (SUTD) have found a number of odd ingredients in their food from the economical rice stall in the canteen.

The latest ingredient, an unidentifiable black insect, was found by Stomper Anonymous yesterday (Nov 21). He had ordered from the SUTD canteen's food stall.

Students have been finding these "ingredients" for over a year now, as far as the Stomper knows.

Stomper Anonymous also sent in other photo from various students, which show a nail, what looks like a caterpillar, and an insect in the food from the economical rice stall.

According to the Stomper, the students have complained to the school's management, and NEA has come down to the school to investigate before.

The Stomper shared that during the Chinese New Year period this year (early February 2016), NEA suspended the stall for 2 weeks, having found that the stall placed their dishes on the floor.

However, students continued to find more "extra ingredients" in their food.

The Stomper says that this incident does just affect the undergraduates, but also the graduates, staff and lecturers.

He was unable to say if the stall's hygiene rating had changed.

Stomp will be contacting NEA regarding this matter.