Passenger injured after 1 car rams into another, causing it to crash through railing in hit-and-run at Bukit Timah Road 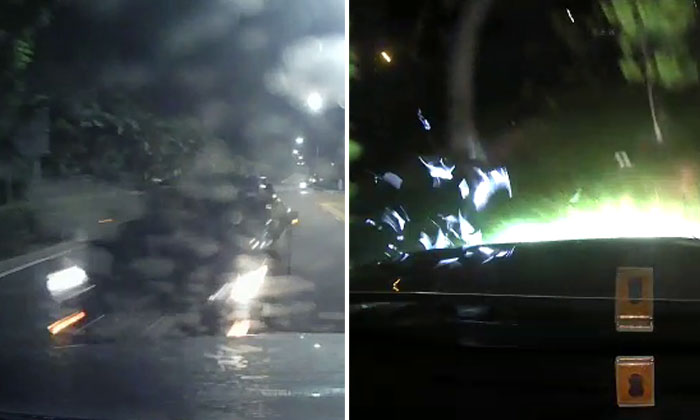 A 29-year-old man was injured in a hit-and-run accident along Bukit Timah Road in the early hours of Saturday morning (Jan 26).

Several Stompers alerted Stomp to the accident and shared videos that were circulating on WhatsApp.

The footage, taken from both the car's front and rear cameras, showed the driver travelling onto Bukit Timah Road from a filter lane.

Suddenly, a car rams right into the rear of the car with the cameras.

The impact causes the car to crash through guard railings on the left side of the road and land front-first onto the ground.

In the videos, a man is heard groaning in pain as his friend asks him if he is okay. Shortly after, the friend calls for assistance and says that his companion has dislocated his leg.

A 29-year-old male passenger from one of the cars was conscious when taken to Tan Tock Seng Hospital, a police spokesman said.

Related Stories
Driver causes Stomper to fall off bike after making sudden brake in Tampines, police investigating
Rider sent rolling on BKE after driver makes sudden lane change, then drives off like nothing happened
Driver assisting police with investigations after knocking over cyclist in hit-and-run accident at Punggol Central
More About:
accident
hit-and-run