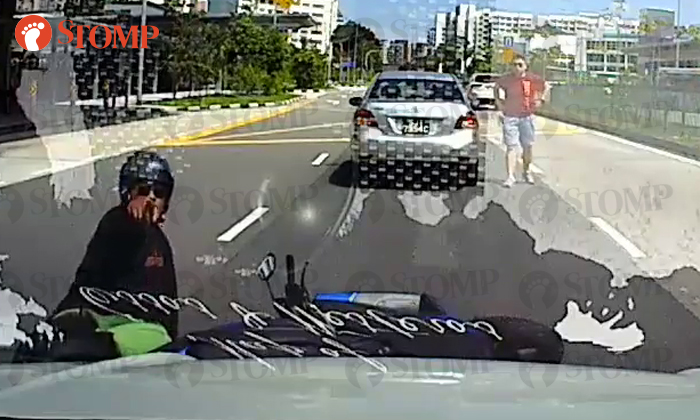 Stomper Kazi was riding his motorcycle along Tampines Avenue 2 on Tuesday (Jan 1) when he crashed into a Toyota whose driver had suddenly braked in the middle of the road.

According to Kazi, the incident -- which occurred at around noon -- left him with injuries to his neck, spine and hip. He also suffered a high fever and vomiting.

The Stomper uploaded a video of the incident on Facebook and said that the Toyota driver of SJT7954C had been "swerving left and right".

"He wasn't happy because I was slow," added Kazi, who can be seen speaking to the driver in the beginning of the video.

Kazi added: "I asked him why he needed to honk when the green light had just changed. When he drove beside me, he was also using his phone.

"That was the reason why I asked him [about it] and shouted at him."

The Toyota driver then drove off when the traffic light turned green, with Kazi riding behind him.

However, the driver suddenly braked in the middle of the road for no apparent reason, which caused Kazi to collide into the Toyota's rear.

A confrontation between both parties occurred after the Toyota driver exited from his car.

A passing Foodpanda rider and another man, believed to be the one whose car camera filmed the video, also stopped at the scene.

"You can see me walking and trying to pick up my bike. But it was too heavy," recounted the Stomper, who also said that the driver then "took photos and rushed off, stating that he wanted to report [the incident] to the police".

"The motorcyclist, a 27-year-old man, was conscious when conveyed to Changi General Hospital," a police spokesman told Stomp.