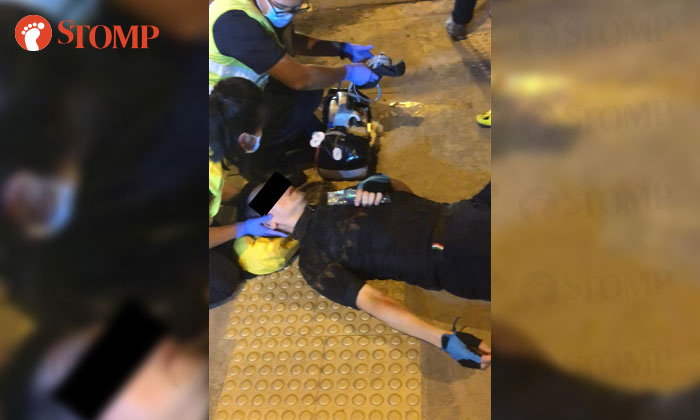 A 51-year-old cyclist was taken to hospital after he was hit by a car at the junction of Punggol Central and Punggol Road on Friday night (Dec 7).

The police told Stomp that the 60-year-old driver of the car is assisting with investigations.

Stomper Patrick alerted Stomp to the accident after witnessing what happened near Block 602B Punggol Central.

"I had stopped my car at the cross junction when I saw a car from my left making a right turn while a cyclist was riding his bike at the pedestrian crossing," he said.

"I think the car didn't see the cyclist and hit him, sending him flying."

"The driver was so ruthless, he hit the cyclist and didn't stop."

Patrick told Stomp the impact had caused the cyclist's bicycle to break into three pieces. 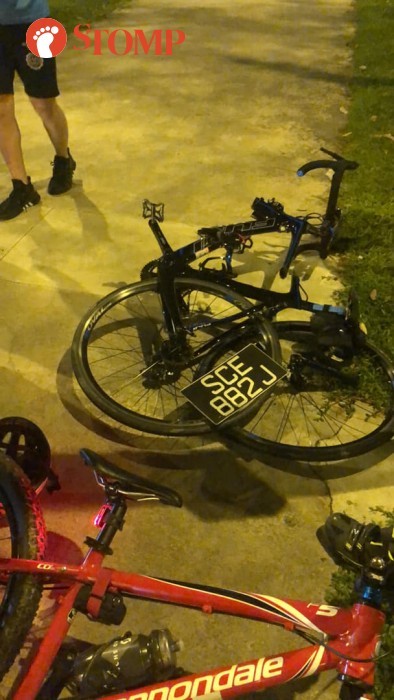 "I turned on my hazard lights and exited my car to assist the biker.

"I was worried that he would be hit by another vehicle as he was lying on the road in front of oncoming traffic.

"Two of his cycling friends helped me to carry him to the sidewalk where we then called for an ambulance and the police and also informed his family what had happened."

Patrick added that he was surprised that while picking up debris from the road, they found the driver's car plate as well.

In response to a Stomp media query, the police said they were alerted to the accident at about 10.30pm.

"The cyclist, a 51-year-old man, was conscious when conveyed to Sengkang General Hospital," said a police spokesman.

Stomp understands the incident was initially classified as a hit-and-run before the police managed to find the driver.