Rider sent rolling on BKE after driver makes sudden lane change, then drives off like nothing happened 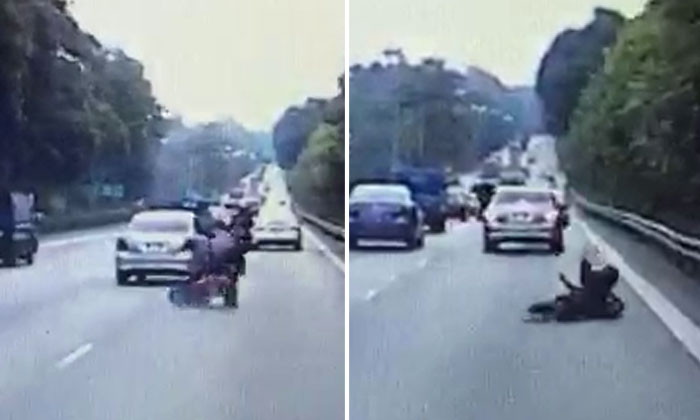 A rider fell off his motorcycle and was sent rolling on the Bukit Timah Expressway after trying to avoid a driver who made a sudden lane change in front of him.

The incident was caught on video and posted on Beh Chia Lor - Singapore Road's Facebook page.

According to the post, the incident happened on the BKE towards Woodlands, before the Bukit Panjang exit, on Nov 30 at about 9am.

The contributor, who is apparently the rider in the video, is appealing for witnesses who are able to identify the car and its driver.

In the video, the motorcyclist is seen riding in the first lane.

"Looking for witnesses to identify culprit driver during an accident at BKE towards Woodlands (just before Bukit Panjang...

A driver in the second lane turns on his car's right indicator light and makes a lane change without appearing to check his blind spots.

The rider has little time to react and tries to swerve to avoid the car.

This sends his bike skidding across two lanes while he is sent rolling in the first lane.

The driver who made the lane change applies his brakes but then proceeds to drive off as if nothing happened.

Thankfully, the car recording the incident manages to slow down in time to stop behind the fallen rider.