Passenger allegedly vomits in cab, refuses to pay fare and shoves cabby onto the ground 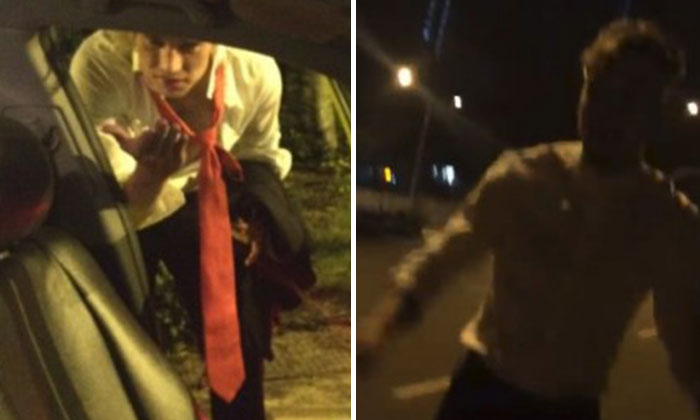 Facebook user Lance Ng uploaded a post on Sunday (Feb 4) about two fare evaders who not only refused to pay but shoved him after he chased them for the fare.

The incident allegedly happened on Sunday, at about 2.15am.

Lance said that he picked up the two men from North Bridge Road,  outside Raffles City Shopping Centre, and took them to Lim Teck Kim Road.

During the trip, as the trio were passing by a traffic junction at Neil Road, one of the passengers started winding down a rear window as he was feeling nauseous.

The passenger vomited and some of it fell inside the cab.

Lance asked the passengers to clean up the mess they caused, proposing that they stopped by a petrol kiosk to grab the items they needed.

The passengers refused and simply snatched wet tissues from Lance to wipe the taxi’s interior.

Lance noted that the taxi was still not clean despite their flimsy attempt.

After that, the two men alighted the cab and tried to leave without paying.

Lance followed the men and demanded that they pay the fare, which was less than $10.

The two refused, prompting Lance to call the police at 2.25am.

The two men started walking in the direction of Cantonment Road.

One of them started becoming frustrated with Lance and asked him to ‘piss off’.

In one of the videos uploaded, Lance confronts one of the passenger, telling him that he needs to pay the fare.

The man insists that he already paid his fare, and asks Lance to 'look in the fu**ing cab'.

He subsequently shoved Lance and the cabby fell to the ground, twisting his ankle during the fall.

The two then tried to board another taxi, but Lance stopped the driver and explained to him what happened.

The two men, realising that they could not leave via the cab, continued walking towards Cantonment Road.

“(I) called the SPF five times asking where they were, and it’s been 20 minutes and they still haven’t arrived.”

Lance said that the two men went up to The Pinnacle at Duxton, and ran off.

He called the police again to tell them that the two had escaped, before walking back towards Lim Teck Kim Road, where he had left his cab.

Lance theorised that the two men, despite being foreigners, probably work and stay in Singapore, as they were familiar with places such as the McDonald’s branch at Anson Road, and another prata shop along Lim Teck Kim Road.

“Shame on you (for) cheating my hard-earned money.”

He also criticised the two’s thuggish behaviour, adding that if they had weapons on them, he could have been dead.

Lance ended his post by saying that he had lodged a police report.

Related Stories
Cabby says man evaded $43.50 fare by pretending to be drunk, then showed police he has money
Man who did not pay my mum $19 for your taxi fare, please come forward before we make a police report
Motorcyclist mounts pavement just before ERP gantry, then goes back on road after he passes it
More About:
evade fare
taxi
dispute