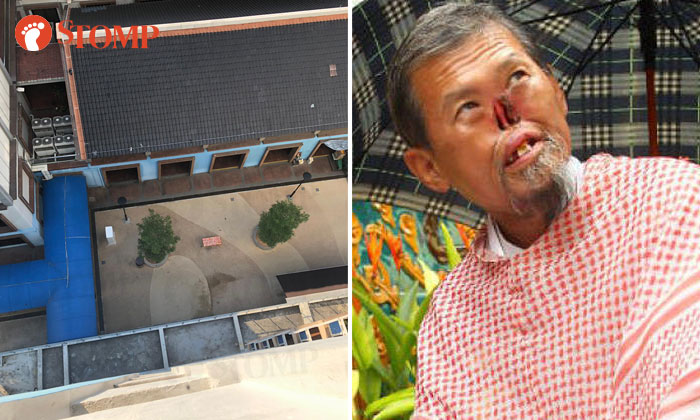 Stompers Fitzy and Sri alerted Stomp to the incident.

Sri said she saw a police death tent set up at the foot of the block at about 11pm.

Fitzy, who was neighbours with Zeng and often saw him in the neighbourhood, said that she saw a stain on the ground near the block.

In response to a Stomp query the police said they were alerted to a case of unnatural death at about. 9.54pm.

"A 66-year-old man was found lying motionless at the foot of the said block and was pronounced dead at the scene by a paramedic," a police spokesman said.

"I hope that our fellow Singaporeans will pray he rests in peace instead of making him a laughing stock," Fitzy said.

Zeng made headlines over the years for his several run-ins with the law.

He earned his nickname 'Parrot Man' in 2008 after blaming his pet parrot for getting him arrested and charged with abusive language on two police officers. He was fined $2,500.

In 2011, he gained attention for his unsuccessful attempts at contesting the 2011 general election and presidential election.

The next year, he told The New Paper that he was selling tissue paper for a living and could no longer look after his beloved parrots.

In 2017, the management of Ngee Ann City shopping mall had to put up a notice at its premises warning the public not to donate any money to Zeng.

The management had called the police over 30 times that year to report that Zeng had been pretending to be crippled while selling tissue packets along the underground pedestrian walkway linking Ngee Ann City and Wisma Atria.

In September that year, a fire broke out at a Geylang Bahru flat that reportedly belonged to him despite his previous claims to be homeless.

Last August, he was arrested along Orchard Road for persisting in disorderly behaviour despite repeated warnings from police.

He was arrested again in October after turning violent and hurting two police officers at Geylang Serai.