Fire at Geylang Bahru flat: Owner revealed to be 'Parrot Man' who claimed to be homeless 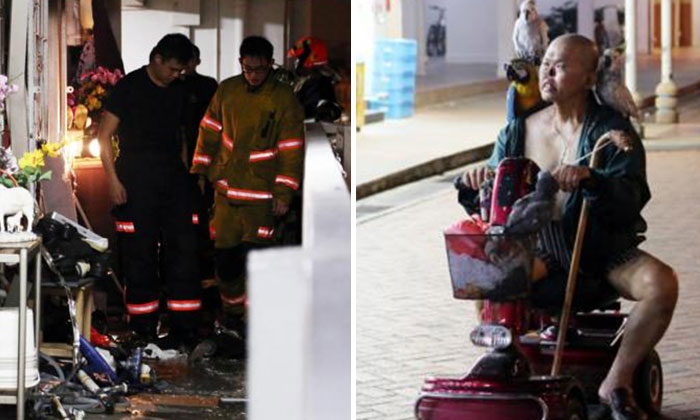 A neighbour has revealed the owner of a Geylang Bahru HDB unit that caught fire, to be ‘Parrot Man’, who previously claimed that he was homeless.

The fire which happened in a unit at Block 68 Geylang Bahru on Monday (Sept 11) at around 8.15pm, was reported by Stomp in an earlier article.

Zeng Guoyuan, 65, more commonly know as Parrot Man, named for his pet parrot which he carries around, was diagnosed with cancer in 2014 which required the excision of his entire nose.

He became a tissue peddler and told Lianhe Wanbao in June 2015, that he had sold off his flat to pay off debts he owed to friends.

Homeless, he said he had to spend his nights on his mobility scooter.

However, when reporters visited the scene of the fire, a neighbour told them that the owner of the unit which caught fire was none other than Zeng.

Not only that, the affected unit was composed of two three-room flats which had been connected.

When reporters got in contact with Zeng yesterday morning (Sept 12), he admitted that he had bought the two flats back in 2015.

He added that he had been living in the unit with his wife, but the fire on Monday had left him with ‘nothing’.

Reporters then asked why he had claimed to be homeless,  and he explained that this was due to his illness.

“I have colorectal cancer, so I need to carry a colostomy bag.

“In order not to dirty the bed, I chose to spend the nights on my mobility scooter instead.”

He also denied owning two cars as alleged by the neighbour.