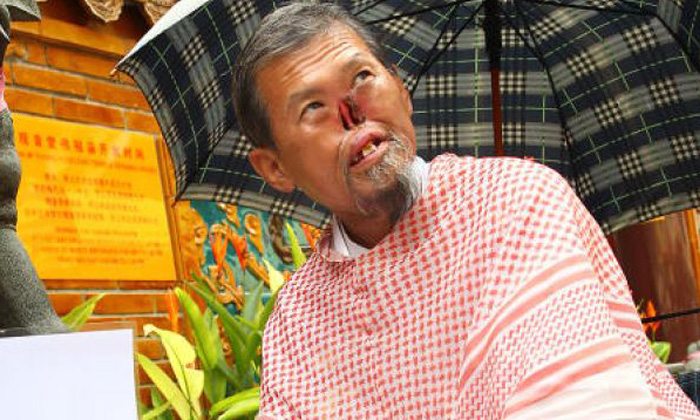 Mr Zeng Guoyan, 65, turned violent and hurt two police officers while he was being arrested at 1 Geylang Serai on Saturday (Oct 13).

The police were responding to a complaint from a member of the public at 11.30am about a man who was asking the public for money, reported The Straits Times.

When police officers engaged Mr Zeng, he allegedly refused to cooperate with the officers' instructions despite repeated warnings and turned violent.

This is not the first time Mr Zeng have fallen foul of the law.

Preliminary investigations revealed that over the past few weeks, the police have received similar complaints against him for disrupting the peace and causing public nuisance.

In an earlier Stomp article, the former businessman was arrested for disorderly behaviour after he was verbally abusive towards another man along Orchard Road on Aug 25.

Over 30 calls were made in 2017 to the police by the management of Ngee Ann City to report Mr Zeng as pretending to be crippled while selling tissue packets along the underground pedestrian walkway linking Ngee Ann City and Wisma Atria, reported The Straits Times in an earlier article.

He was also featured in Stomp on another occasion when his flat in Geylang Bahru caught fire, after he claimed to be homeless.

Mr Zeng, who was diagnosed with nose cancer in 2014, was left with a gaping hole on his face where his nose used to be following a surgery.

According to The Straits Times, he earned the nickname 'Parrot Man' after he blamed his pet parrot for getting him arrested and charged for using abusive language on two police officers in 2008.

In 2011, he made headlines when he contested in the general election and subsequently the presidential elections.