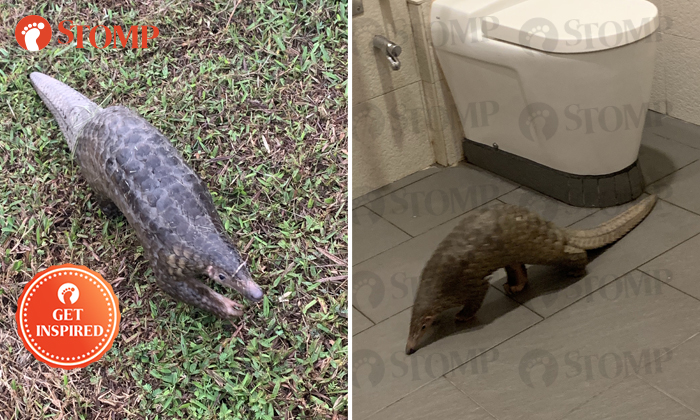 Residents at Springleaf Nature Park banded together to keep a pangolin safe after it was found wandering in a nearby carpark on Friday morning (Aug 16).

They redirected the animal, which had also tried to cross a busy road, to a public toilet at the park until staff from the Animal Concerns Research and Education Society (Acres) arrived.

Stomper Sneo said he was on his morning walk at the park when he noticed two residents taking photos of the Sunda pangolin.

Sneo recounted: "It wandered towards the carpark and walked towards Upper Thomson Road, so I called Acres.

"At that time, there was a group of around 30 residents doing line-dancing or some exercise in the park.

"As the pangolin had entered a guardhouse in the park and was near the public restrooms, I decided to get everyone to direct it into the handicapped toilet to keep it safe."

According to Sneo, the pangolin was calm throughout the incident and even went to sleep near the toilet bowl.

In response to a Stomp query, Acres' deputy chief executive officer, Mr Kalai Vanan, said the wildlife rescue team received a call about the pangolin at about 7.30am.

Mr Kalai told Stomp: "It was spotted near a nature park but unfortunately, it was at the open carpark.

"Traffic accidents are a huge threat to Sunda pangolin populations in Singapore and there is a chance that this individual could have stumbled onto the road.

"We have since rescued the pangolin and given a quick check to ensure that it is fine."

Asked how he felt about helping the pangolin, Stomper Sneo said it came as "second nature" for him.

He added: "I don't know how the pangolin came about, but it would have needed to cross the road in order to reach the forest, so it's good that it was rescued."

Related Stories
Night shift worker gets exotic company from pangolin, carries it back to forest near Woodlands Road
Baby pangolin kept safe by passer-by while 'trying to catch last train' at Hillview MRT station
How did this pangolin end up dead on grass patch along Mandai Road?
More About:
animals
pangolin
pangolins