How did this pangolin end up dead on grass patch along Mandai Road? 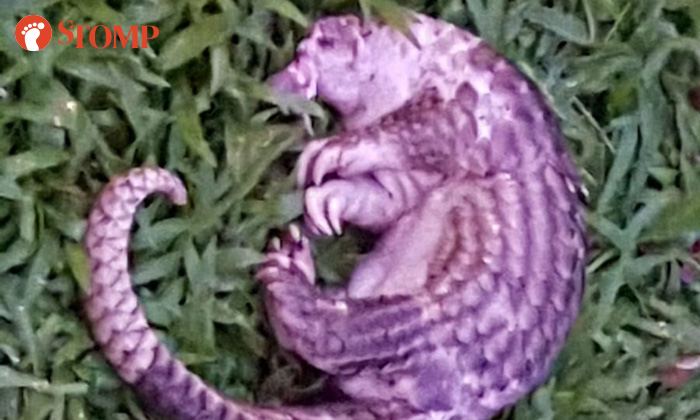 A Stomper was on his way to work at about 6.50am this morning (Jul 23) when he chanced upon the carcass of a pangolin on a grass patch along Mandai Road.

The Stomper said that the carcass was about four bus stops away from the Singapore Zoo, near the entrance of a protected facility.

He said: "I had alighted from a cab when I saw it.

"I don't know when and how it died, it was already there when I passed by."

The Stomper had seen a pangolin nearly six months ago in this area as well, although it was a much bigger one with a longer tail and was alive.

"I was cycling to work when I saw it slowly making its way on the footpath, just taking its own sweet time," said the Stomper.

"It was crawling slowly on the pavement near a forested area that was about 100m away from this site, after a traffic light junction.

"But it retreated back into the forested area when I approached it."

The Stomper also added that these walkways are frequented by Personal Mobility Device (PMD) riders as early as 6.15am, and wondered if the pangolin could have been run over by one of them.

"At the speed they are riding, they could have easily collided into a pangolin which totters slowly in its path that can be rather narrow, as it is surrounded with encroaching creepers and ferns," he mused.

Related Stories
Python spotted at Waterway Point traffic junction rescued within minutes
What a family day out is like for these wild boars in Pulau Ubin
Woah! Look at this freaky huge catch found floating in Bedok Reservoir
More About:
pangolin
animals
nature