'Old apek' allegedly cups woman's buttocks at supermarket, gets chased down and arrested 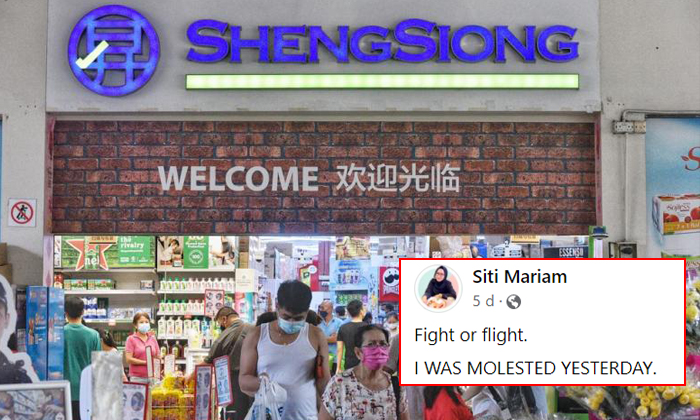 The police said they are investigating a case of outrage of modesty along Bukit Batok West Avenue 8, and "a 66-year-old man was arrested in relation to the case".

A woman in Singapore had said the man allegedly molested her at a Sheng Siong supermarket in Bukit Batok West last Thursday (April 21).

The woman, Ms Siti Mariam, who shared her experience on Facebook, said she wished to commend the supermarket staff members for helping catch the man, and to encourage others who have been through something similar to not be afraid to speak up.

Ms Siti said she was getting some groceries with her seven-year-old son Hilman at the supermarket at around 4.15pm on April 21.

Her son had run off to the candy aisle, while she stood in front of some goods.

"Suddenly, I felt a hand cupped and brushed up my butt. Like an intentional caress that lasted for a good two seconds," she said.

Thinking that it was her son, she turned around to reprimand him, but realised it was an old, bald man, who was "grinning back" at her.

She shouted at the man: "What are you doing?" and "instinctively" raised her hand to slap him.

"You better stay where you are, I'm calling the police!" she yelled.

Ms Siti said the man appeared "shocked" by her reaction, and tried to get away, but she chased after him inside the store.

She initially caught up with the man, grabbing him by his collar, but he broke free and ran towards the direction of a nearby carpark.

Ms Siti said she remained at the entrance of the supermarket as she was still holding unpaid items. But at that moment, two Sheng Siong staff members "sprinted" past her, and brought back the old man shortly after.

"You got the wrong person today, apek," she said to the man, who was arrested when police arrived at the scene.

"He admitted that he felt like molesting today, and so he did," she wrote in her post, adding that CCTV footage later "showed his actions very clearly".

Ms Siti said she wanted to commend the Sheng Siong staff at Block 154 Bukit Batok West Avenue 8 who helped her.

"Without their help, the apek would have gotten away with just a literal slap on the wrist, and a slightly torn collar," she wrote.