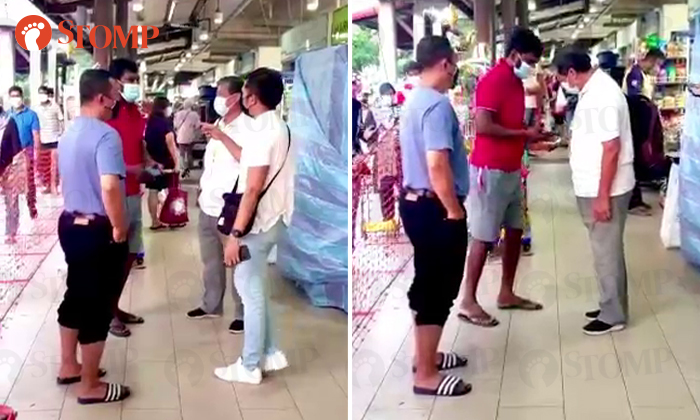 A 38-year-old man was arrested over an alleged case of outrage of modesty at Geylang Serai Market and Food Centre on Sunday morning (Mar 27).

A Stomper shared a video showing the man being spoken to by enforcement officers at the scene at around 9am.

The Stomper recounted: "The man in the blue shirt told enforcement officers from the National Environment Agency (NEA) that the man in red had taken an upskirt photo but there was no evidence."

The Stomper also commended the enforcement officers for how they handled the situation and prevented things from getting heated.

He added: "The enforcement officers were so calm while waiting for the police to arrive.

"The younger officer was very professional while talking and he really cooled everyone down. Without him, the situation might have been havoc but he turned things from heat to water. I applaud his ability to handle such a situation."

In response to a Stomp query, the police said they were alerted to an alleged case of outrage of modesty at 1 Geylang Serai at 7.13am.

"A 38-year-old man was arrested in relation to the case," they added.

Related Stories
Voyeurism at Compass One: Man, 36, who allegedly took upskirt video of woman arrested
Man kneels down to beg for mercy after allegedly taking upskirt shot of woman at VivoCity
Man caught by shoppers after failed upskirt attempt at Nex, found with obscene materials of other victims
More About:
arrest
upskirt
hawker centre