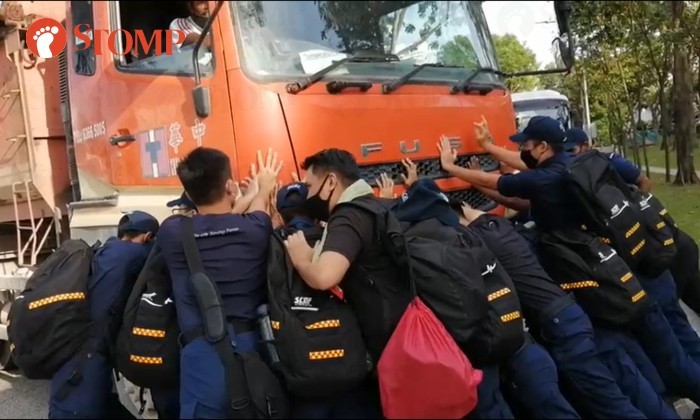 A group of off-duty Singapore Civil Defence Force (SCDF) personnel sprung into action when they saw that a truck had stalled in the middle of the road, which prevented other vehicles from passing through.

Stomper Wann was impressed by what he saw and shared videos of the incident, which happened at Jalan Bahar Road on Nov 5 at 5pm.

In the video, the SCDF personnel can be heard yelling "push" and encouraging each other as they work together to move the truck.

One of the SCDF officers can also be heard saying "almost there" as the group gives one final push.

"There was a stationary truck in the middle of the road and other vehicles could not pass through as the truck was too big," Wann said.

"If I'm not wrong, the truck driver experienced a clutch failure as he was making a U-turn and could not get the truck to move.

"This caused traffic congestion as the truck took up two lanes.

"It just so happened that a private bus full of SCDF personnel was nearby. When they saw what happened, they immediately got off the bus and tried to help."

Wann said he believes that these SCDF personnel are from the National Service Training Institute (NSTI).

"These SCDF officers analysed the situation and started to push the truck backwards to make way for other vehicles to pass," Wann added.

"I think this was an excellent move by these SCDF officers. I'm impressed with their quick thinking and coordination, especially in such a tense situation during peak hours. Well done, SCDF!"