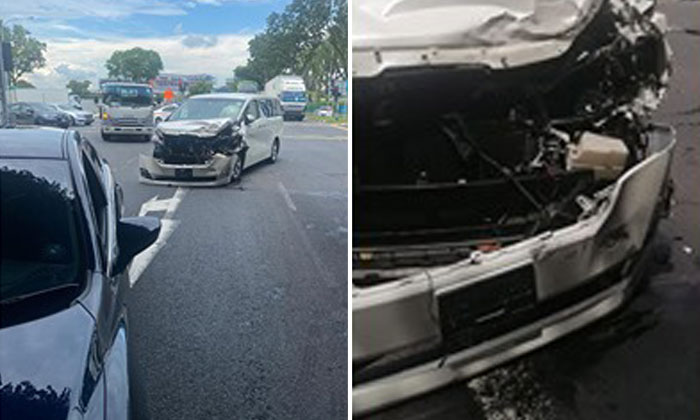 A woman has lauded a Gojek driver as a 'hero' for coming to her rescue after the car she was driving was involved in an accident with a lorry at the junction of Jalan Ahmad Ibrahim and Jurong Port Road on Aug 17.

The police told Stomp they were alerted to the accident at 12.28pm and that a 49-year-old female car driver and her 31-year-old female passenger were conscious when taken to Ng Teng Fong General Hospital.

Magdalene Ong shared what happened to her in an article on The Pride.

In the article, she said she was driving from Jurong Port Road to Corporation Road to pick up her son from school.

Her helper was sitting in the passenger seat.

"I was driving in the middle lane when suddenly, a lorry cut into my lane," she said.

She described the collision as being serious enough to cause her car's bonnet to be badly smashed up and all of its airbags to be deployed.

"In a split second, I went from having a normal day to being full of fear, panic and confusion," she said.

"At that point, I was most worried about my helper in the passenger seat because, after the accident, she couldn't hear anything.

"She indicated to me that she was experiencing hearing loss due to the loud noise from the collision.

"Thankfully, her hearing returned after a few minutes.

"I was in shock but I recall experiencing pain on both my legs, back and especially on my right hand."

Magdalene said she was in a daze when Gojek driver Mr Yeo Chin Yong came forward to assist her.

She said: "Things were still hazy from the collision but I remember him saying: 'Don’t worry, I saw everything and I will be your eyewitness'."

She described how Mr Yeo helped to calm her down and also make calls for an ambulance, the Traffic Police, her son's school and her close friend.

"Other cars slowed down around us but didn't stop," she said.

"The whole time after the accident happened, Mr Yeo stayed behind to await the arrival of the ambulance and Traffic Police.

"He even helped me talk to the lorry driver.

"After 15 minutes, the authorities arrived and Mr Yeo assured me that everything had been well taken care of before I was taken to the nearby hospital."

He helped her to file a police report and even gave her advice on what needed to be done a few days after the accident.

"I am truly grateful and touched by his heroic and kind gesture," she said.

"He is a role model to all road traffic users."

When Stomp reached out to the 51-year-old Gojek driver regarding what happened, he recalled witnessing the collision at about 12.30pm.

He stopped his car and turned on his hazard lights to alert other road users to the accident before getting out to help.

"I saw a lady driver and her helper inside the car," he said.

"The helper alighted from the car and looked dazed.

"She squatted down by the side of the road and held her head in pain.

"I asked if she was okay but she was mostly unresponsive.

"I told her to move further away from the road, and onto the pavement, for her safety.

"I checked on the lady driver to make sure she was okay.

"I then called the police and ambulance, both of which showed up within 10 minutes.

"After ensuring the driver and her helper were in good hands, I left the scene."

Mr Yeo, who has been driving with Gojek for a year, told Stomp he stayed with the victims to make sure they were okay and that they received help as soon as possible.

He shared that this is not the first time he has stopped to help accident victims.

"Once I witnessed a motorcyclist fall on the road," he said.

"I immediately stopped my car behind him so that other vehicles would not run him over.

"It's not that other motorists would not help, but it may be a while before someone else does.

"I believe that responding quickly and offering help is important, as it could save lives."

In response to a Stomp query, a Gojek spokesman issued the following statement on the incident:

"We are aware of the kind act by our driver-partner, Mr Yeo, and have reached out personally to extend our thanks.

"We hope his act of kindness and going the extra mile for fellow road users will inspire all our driver-partners to continue to be gracious and considerate on the road."