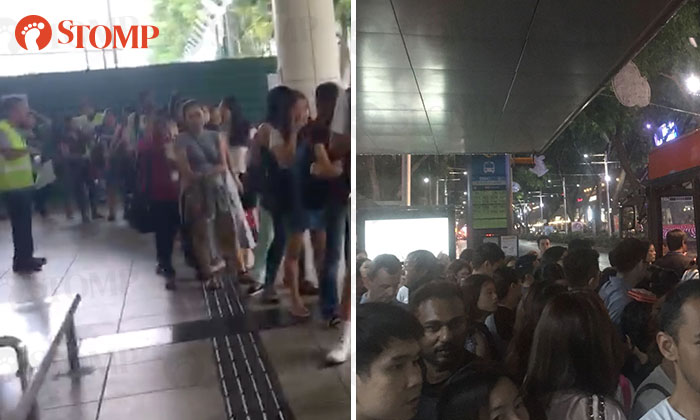 Train services on the North-South Line between Newton and Ang Mo Kio resumed operations at 1.50pm today, according to a post by SMRT on its Facebook page.

“This follows an all-out, overnight effort to clear water in the tunnels between Bishan and Braddell MRT stations.

“Teams from the SCDF, PUB, LTA and SMRT worked jointly to pump out water from the tunnels. Last night, teams from SMRT and LTA also conducted network-wide checks on MRT tunnels.

“SMRT thanks the various agencies for stepping in to assist since yesterday. In addition, the Singapore Police Force assisted with traffic control and crowd management along roads and at affected stations, and SBS Transit provided additional buses for the bridging bus services.

Water in the tunnels and a trackside fire caused train services along the North-South Line to be halted yesterday evening (Oct 7).

Stomper John was among one of the passengers affected by the disruption.

In a telephone interview, John told Stomp that he was out yesterday from about 6pm, and trains on the East-West Line were more packed than usual as well.

“I’ve left Orchard at about 6pm and I heard there was no North-South Line train service.

“I was worried about making my way home upon hearing this.

“A lot of people were queueing up for the buses.

“Everyone was boarding the buses and it was severely crowded.

“There were even passengers who boarded through the rear doors.”

While he would usually reach home at about 7.05pm if he left Orchard at 6pm, John said he only reached home at around 8.40pm yesterday.

Stomper Johann who travelling from Toa Payoh to Liang Court on a bus found himself in a similar plight.

“The bus travelling from Newton at 9.10pm only reached Far East Plaza at about 10.05pm.

In the latest update on SMRT’s Facebook page, the transport operator said in an update at 10.09am today (Oct 8) that the water in the tunnels between Bishan and Braddell MRT Stations was almost cleared, owing to the efforts of its staff and teams from Singapore Civil Defence Force (SCDF), Public Utilities Board (PUB), Land Transport Authority (LTA).

SMRT has also arranged for free bus and bus bridging services to bring commuters from Newton to Ang Mo Kio.

Stomper C who was travelling on one of the free services today (Oct 8) at 9.40am today told Stomp that ‘services are thankfully, quite efficient’.

“Someone on the bus said, “Singapore is no worry one. Only will get Stomped.’”

The disruption affected 13 stations on the 26-station line, and was caused by two separate incidents reports The Straits Times.

Water found in the tunnel and services between Bishan and Toa Payoh were halted at 5.30pm yesterday (Oct 7).

A fire was also detected between Marina Bay and Raffles Place stations at 5.55pm, but went out by itself despite the SCDF.

Earlier, SMRT had said that it hoped to get services up and running again on Sunday, but the SCDF said that a ‘prolonged operation’ to siphon water which had entered the tunnels during a heavy rain on Saturday afternoon, was expected.