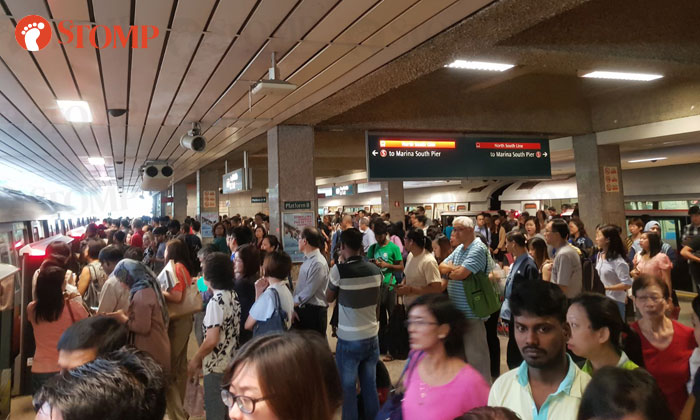 Commuters were hit by yet another round of train delays on both the North-South Line and Downtown Line during this morning's (Aug 18) rush hour.

This comes just after yesterday's (Aug 17) two-hour delay during the evening peak hour on the North-South Line.

Pasidah was held up at Tan Kah Kee MRT Station where a sign was put up informing commuters to add 45 minutes to their travelling time.

She took one of the free bridging bus rides provided to get to her destination.

Kannan shared photos of crowds of people on Woodlands MRT Station's platform and at one of the station's bus stops.

"Commuters at Woodlands were left stranded as their Jurong East-bound trains took longer to come instead of the usual morning peak hour frequency," said the Stomper.

SMRT tweeted at 6.30am that an additional 45 minutes travelling time was needed for passengers travelling between Marina South Pier and Sembawang on the North-South Line due to the signalling fault.

However, just eight minutes later, it advised commuters to take other MRT lines or "seek alternative transport towards city area".

Train service finally resumed at 9.22am.

SBS Transit tweeted at 6.25am that there was no service on the Downtown Line due to a signalling fault and added, "We are sorry".

They informed commuters that free bus rides and bridging bus services were available at designated bus stops near affected stations.

At 9.03am, it said that its trains were running normally and apologised for the inconvenience caused.

With the O levels and PSLE oral exam taking place today, affected students were given time chits from SMRT, reports The Straits Times.