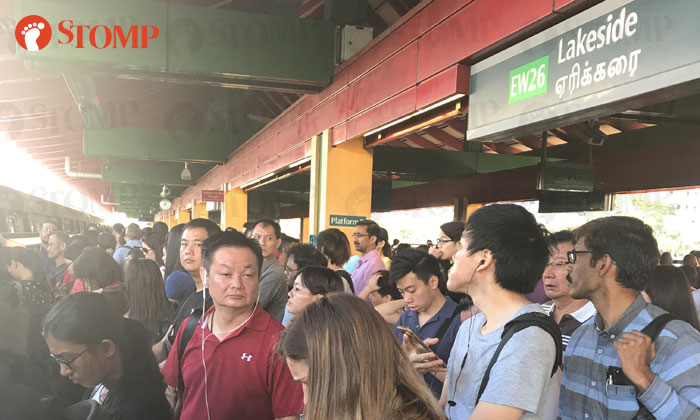 Commuters were frustrated when their travel time was extended due to a delay on the East West MRT Line from Pioneer to Tuas Link this morning (Jun 28).

Stomper Braveheart was one of the many affected when he boarded a train at Lakeside at 8.32am to get to Tuas Link which is seven stops away.

What should have only taken around 26 minutes, according to SMRT's journey planner, took over an hour when the Stomper finally arrived at his destination at 9.48am.

According to Braveheart, the delay started from Pioneer station.

"They told us that there was a signalling fault," he said.

"We were told to get off the train three times and to change trains after waiting.

"We were also stuck at Tuas West Road station where we could not go backwards or forwards."

Stomper Eric told Stomp that the delay on the East West Line affected him on the North South Line as well where crowds of commuters were left waiting on the platform at Choa Chu Kang station.

They were told to add 10 minutes to their travelling time due to a train fault from Joo Koon towards Tuas Link.