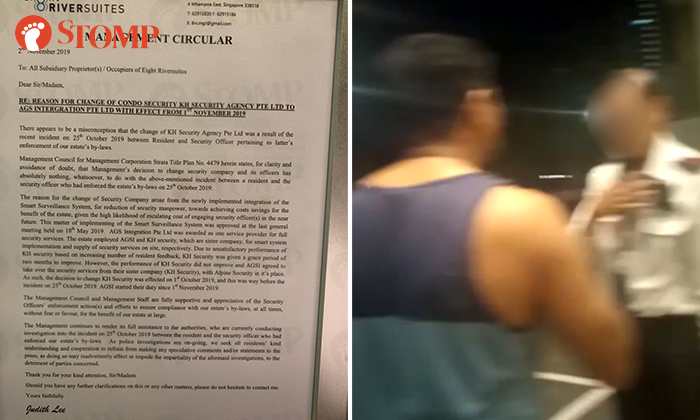 A notice was put up at Eight Riversuites condominium clarifying that the change in security agency employed at the condo had nothing to do with a viral incident.

Several Stompers alerted Stomp to a video of a resident yelling profanities at security guards after they had stopped the resident's visitors from entering the condo's carpark. The incident apparently occurred at about 11pm on Oct 25.

Since then, the resident's employer has started looking into the matter and he has also filed a police report alleging that he was doxxed.

A Stomper who resides in the condo contributed a photo of a notice and said: "I was coming home from work at about 7pm yesterday (Nov 6).

"I was at the lift lobby and saw that they had put up this notice at a noticeboard."

The notice clarified that the change in security agencies employed was due to the poor performance of the previous security agency, KH Security.

KH Security, which is AGSI's sister company, was given two months to improve. Failing that, AGSI agreed to taking over their services.

The Stomper added: "I was surprised when I found out about the viral incident.

"I've been living here for about a year and have never really seen the resident around before, so I don't know him personally.

"I do see the security guard, Steven Heng, quite often. I didn't talk to him personally but have seen him buying his food.

"The security guards were all very friendly and polite. They once helped my mother-in-law find her way back to my place when they noticed that she was lost.

"Ever since the change in security guards, I feel kind of sad because the previous ones were all so friendly.

"Whenever I take a taxi back home, the new security guards would ask me which block I was going to and what my unit number is. They're a lot more careful and strict.

"Before this, the security guards knew where I'm going. They would recognise me, say hi and even ask how I'm doing."