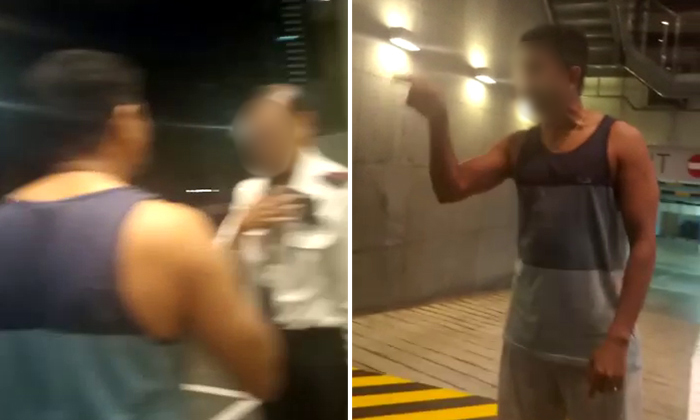 The resident has apparently filed a report alleging that he was doxxed.

The resident's employer is aware of the video and is currently looking into the matter.

A resident who claims that he paid $1.5m for his condominium unit was caught on video yelling profanities at security guards after they had apparently stopped the resident's visitors from entering the carpark.

The incident apparently occurred at Eight Riversuites condominium in Bendemeer, at about 11pm on Friday (Oct 25).

Several Stompers alerted Stomp to the video that was first posted on YouTube, which has since been removed by the user.

According to the security guards in the video, visitors need to pay $10 for parking.

The resident in a blue singlet said to the security guards: "I buy your f****** property for $1.5 million you know."

A blue car can be seen stopped near the entrance of the condominium's car park.

The resident says in the video: "You're putting my visitors in such a position.

"You're telling me for Diwali they can't visit after 11 o'clock? I leave the car here, you do whatever you want to do.

In the video, security guards can be seen explaining that they're just enforcing the rules and they'll get the condominium's management to speak with the resident.

As the video ends, the resident can be seen getting into the blue car and driving into the carpark.

The President of the Association of Certified Security Agencies (ACSA) Robert Weiner said in a statement on Saturday (Oct 26):

"The Association of Certified Security Agencies strongly condemns the untoward behaviour of the resident of the condo towards the security officer on duty.

"ACSA applauds the calm, composed and professional conduct of the security officer in a tense situation.

"ACSA is hopeful that the due process of law will be met with the ongoing police investigation.

"We do not tolerate the abuse of our officers whilst they are discharging their duties.

"Security is our responsible and duty."

The Security Association of Singapore (SAS) posted a statement on their Facebook page on Saturday (Oct 26).

SAS said that they were aware of the video and applaud the officer for his professionalism. They have also reached out to the officer's employer.