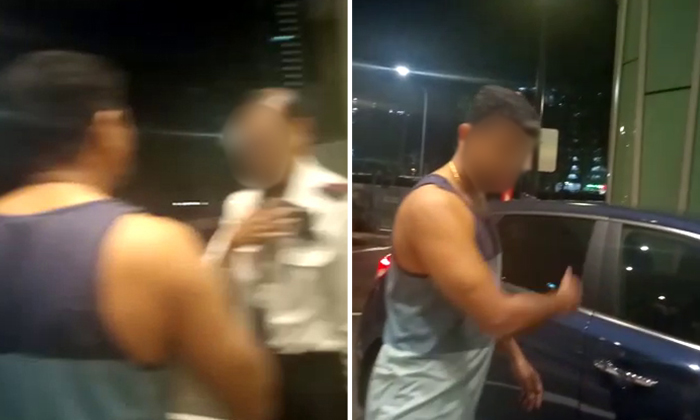 The Union of Security Employees (USE) and two security agency associations have strongly condemned the abuse of security personnel, as a video of a man shouting and hurling vulgarities at his Whampoa condominium’s security guards went viral over the weekend.

The man’s employer, global financial services company JP Morgan, told The Straits Times on Sunday (Oct 27) that it is aware of the video and is looking into the matter.

In a video uploaded to YouTube last Friday, a man dressed in a sleeveless shirt and shorts is seen expressing his displeasure virulently after being told he needed to pay parking fees for guests visiting his condo.

He told security officers that he had bought his apartment for $1.5 million and began swearing at one officer who responded: “We are just enforcing the rules here.”

USE said on Sunday that it is working with the police on the case, and that it has been handing out notices about respecting security officers who are performing their duties.

“While we empathise with the resident on his unhappiness with the rules of the estate, his right of recourse should be through his management committee,” said USE’s general secretary Raymond Chin.

“We strongly condemn any form of abuse of our security officers... The union stands united with our officers,” he added in a statement.

The incident has been reported to the police.

The union and both associations commended the officers for being restrained and calm throughout the incident, and stressed that they were just enforcing rules set by the condo management, also known as the Management Corporation Strata Title (MCST).

Security Association Singapore’s (SAS) president Raj Joshua Thomas said: “Their work is instrumental in helping keep the living environment a safe and civil one for all residents. In the event that security officers are lenient in enforcing in-house rules, the security agency is often penalised though onerous liquidated damages."

Association of Certified Security Agencies’ (ACSA) president Robert Wiener said: “It is essential that the public understand that security staff are there representing the building owners and MCSTs and they have to enforce the by-laws of the estate without fear or favour.”

Meanwhile, JP Morgan declined to comment on whether it paid for the man’s accommodation and for how long he has been an employee.

Labour MP Zainal Sapari on Sunday weighed in on Facebook, and called for more protection for security officers. He said the Protection from Harassment Act (Poha) should be extended to include security officers in condos and private establishments, in addition to public service workers.

Those found guilty of abusing or insulting condo security officers could then be fined up to $5,000, jailed up to a year, or both.

Mr Zainal added that he and fellow labour MP Patrick Tay have urged the Home Affairs Ministry “to consider covering all private security officers under Poha regardless of their worksite”. He wrote: “While we expect SOs (security officers) to ensure a safe and secure environment, they must be protected regardless of any artificial boundary of public or private common spaces.”

A screenshot of the man explaining his side of the story made the rounds on Saturday after being posted on a closed Facebook group for the condo’s residents.

He claimed that the security officers were “bullying” his visitors by asking what time they were going to leave. He added that his Deepavali weekend had been ruined by the incident as he received threatening calls after he disclosed his mobile number in the video.

Mr Thomas said: “SAS trusts that due process will take its course, and cautions against any vigilantism or doxxing against the resident.”

Related Stories
‘$1.5m’ condo owner hurls vulgarities at security guards over $10 parking fee
Woman arrested after stripping off clothes in argument with cabby along Middle Road
Stomper gets into shouting match with driver who made late signal to change lane at Queensway
More About:
viral
dispute
police