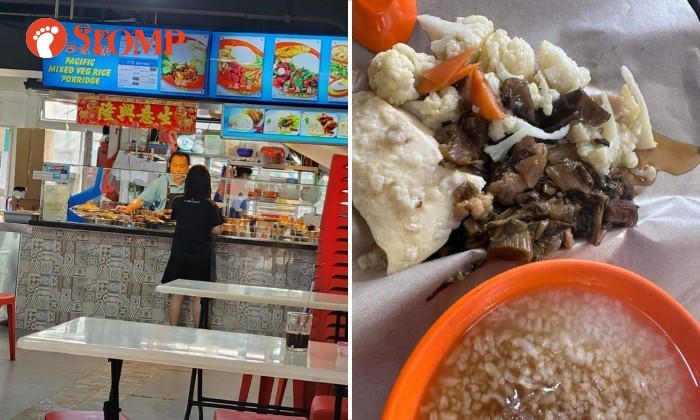 Can we all agree that cauliflower is a vegetable?

Why does it matter?

Because at cai png stalls, you are usually charged more for meat than for vegetables.

A customer ordered porridge, braised pork with preserved vegetables, steamed egg and cauliflower from a North Bridge Road stall on Dec 3 at around 6.30pm and was charged $4.40.

Stomper Ace said that was not the usual price.

"My colleague confronted the worker at the stall. The man claimed that cauliflower is meat. Therefore, he charged us the price of meat," said the Stomper, who shared a photo of the food.

"It's usually less than $4 for two vegetables and one meat."

Is the steamed egg considered meat or vegetable?

The Stomper works nearby and frequents the stall, which sells mixed vegetable rice and porridge.

"Each time a few of us ordered the same dishes, he would charge each a different price," said the Stomper.

"There are many elderly residents in that area and they frequently patronise the stall. I don't wish the elderly to get ripped off."

A similar issue was also brought up in Stomp last week.

Stomper Amos said that mixed rice stalls should display the prices of all their food items. This would help ensure that the pricing would be more consistent and customers do not get a surprise when paying for the food.

Related Stories
Mixed rice stall should display prices of all food items so customers don't get surprised, says Stomper
Man unhappy over $5.40 cai png, so we ordered the same thing to see how much it costs
Market stall charges $4.90 for nasi lemak: 'I felt like a carrot head'
More About:
food
hawker centre
meat
vegetable