Market stall charges $4.90 for nasi lemak: 'I felt like a carrot head' 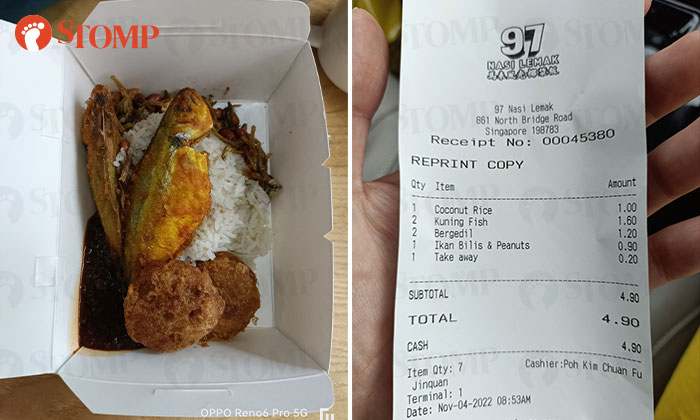 How much would you be willing to pay for nasi lemak?

One Stomper thought $4.90 was too much for what she got.

"It was with no egg, no chicken wings, just potato and ikan (fish)," she said.

"To me, it seems kind of expensive."

When asked how much she thought would have been a fair price, Aries said: "Because it is located at a market stall, I would expect it to be cheaper, probably $3.50.

"I was expecting the rice to be 60 cents as the nearby economy rice stall in the market is in this price range.

"It is like if they use banana leaves to put the dish, then you will be charged for that one piece of banana leaf.

"Their katsu chicken set was $4+ with katsu, egg and rice and ikan bilis and peanut. I felt like a 'carrot head' by their ala carte pricing."

'Carrot head' is a saying used to describe someone who has been ripped off.

Aries added that she did not give feedback but after purchasing the meal went back to ask about the price and was given a receipt.

"The stall is relatively new, less than a year at the market," she said.

"There used to be a long queue when they just opened.

"Now, I hardly see any long queue in the morning.

"When I sent this to my friends, they all said it was $4.90 for two potato (bergedil) and two nasi lemak fish with no egg or chicken was expensive for a market food stall.

"I worry that next time they will also charge for chilli sauce since they are already charging 90 cents for ikan bilis and peanuts.

"I also worry next time if they up the price, it would be more expensive."