No evidence of mistreatment of dogs after accusations against groomer PawPaw Group: AVS 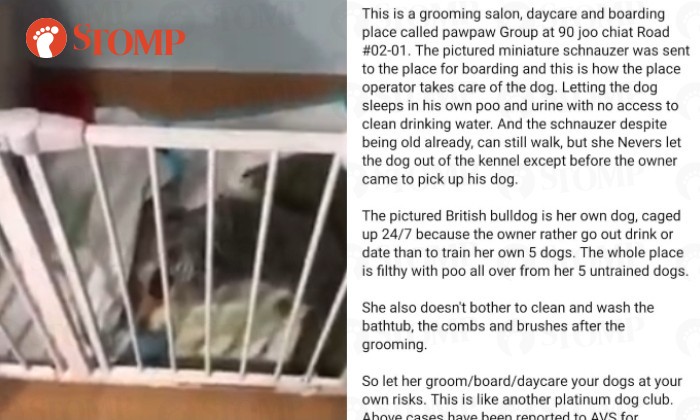 The Animal and Veterinary Service (AVS) has investigated a case of alleged negligence of dogs under the care of groomer PawPaw Group and found no evidence of mistreatment.

Stomper Ryan alerted Stomp to the allegations made by a Facebook user on the Singapore Shih Tzu Club Facebook page and shared screenshots of the post.

The netizen claimed that a miniature schnauzer, who was under the care of PawPaw Group, had "no access to drinking water" and had to "sleep in his own poo and urine".

The netizen added that the owner of PawPaw Group "did not let the dog out of the kennel except when the owner arrived to pick the dog up".

In her post, the netizen also said that the owner of PawPaw Group "does not bother to clean and wash the bathtub, combs or brushes after grooming the dogs".

The netizen then shared that she has reported this incident to AVS.

On July 31, PawPaw Group responded to these allegations and in their statement, they said that "no humans or animals have been treated badly", and that they "cannot tolerate false accusations being made against them".

They also added that the netizen who made these claims against them is an ex-employee of PawPaw Group, and that she had "anger management issues and emotional outbursts" during her time with the company.

In response to a Stomp query, executive director of the Society for the Prevention of Cruelty to Animals (SPCA) Dr Jaipal Singh Gill said: "Animal related businesses have a duty of care to the animals and there are minimum standards that need to be met.

"There are a number of accusations being made in this case and they would need to be thoroughly investigated by the authorities."

Ms Jessica Kwok, Group Director of Community Animal Management at AVS, told Stomp: "AVS, a cluster of the National Parks Board (NParks), takes all feedback received from the public on animal cruelty seriously, and will look into the cases reported.

"We were concerned when alerted to the alleged case of animal mistreatment by PawPaw Group.

"Our officers visited the premises on the same day and found no evidence of animal mistreatment. The premises were assessed to be clean and well maintained."

She said: "While AVS continues to ensure that the necessary enforcement action is taken and raise awareness on animal welfare, members of the public can play a part by promptly reporting suspected cases of animal cruelty to AVS via our website at www.avs.gov.sg/feedback or call us via our Animal Response Centre at 1800-476-1600.

"As with all investigations, all forms of evidence are critical to the process, and photographic and/or video-graphic evidence provided by the public will help.