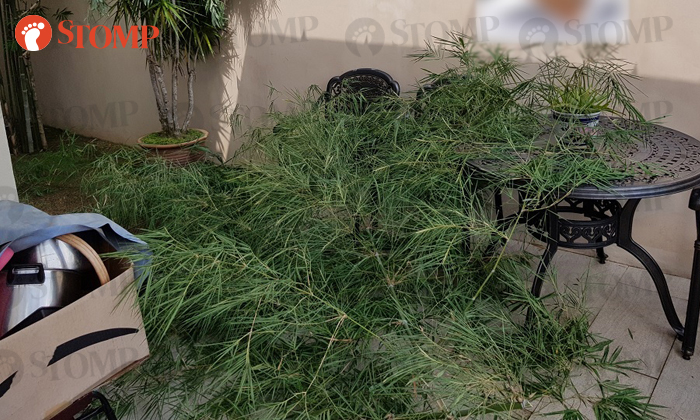 A resident at Sembawang Springs Estate made a police report after his neighbour was caught on camera cutting his family's plants and hurling the leaves over into their compound.

Stomper Chris, whose parents are living in a semi-detached house and have been getting fallen leaves thrown into their compound, alerted Stomp to the incident.

According to him, the neighbour, who has been residing there for five years, started tossing fallen leaves into his family's compound about three months ago.

"It is sad that being his immediate neighbour, we wake up to leaves being thrown over frequently due to fallen leaves from our plants. How are we supposed to stop leaves from falling over and wind from blowing the leaves over?" said Chris.

However, the last straw came when Chris woke up at around 8am on Oct 10 and noticed that "a massive part of my plant has been cut and thrown over to my compound".

He added: "It has gotten a little out of control and is too much to tolerate.

"I referred back to my CCTV footage and learnt that our neighbour committed the act the day before on Oct 9, at 4.57pm."

Chris said this particular incident led him to make a police report (which Stomp received a coy of) and the case was classified as an act of mischief.

He told Stomp: "The police advised us not to do a direct confrontation. They asked if we wanted to press charges for the act of mischief but we dropped it.

"However, despite a police report being made and the neighbour being given a police warning, the incident of hurling leaves over did not end.

"We have been residing here for over 15 years and have never met such ugly behaviour."

"I am hoping that public pressure can put a stop to his actions since a police warning cannot stop him from continuing to hurl fallen leaves over twice a week.

"That's why I turned to Stomp."

In response to media queries by Stomp, the police confirmed that a report was lodged and said the complainant has been advised on his legal recourse.

Related Stories
Yishun neighbourly dispute: New video shows women screaming at each other
Yishun auntie who drove neighbour to build 'wall' creates racket in kitchen -- despite having just been arrested
Neighbours pour unknown liquid and throw dirt from drain along corridor in Yishun Blk 208
More About:
neighbour from hell
neighbour