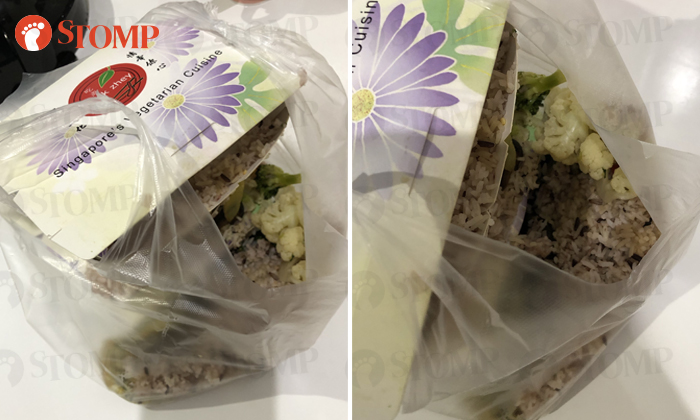 A Pasis Ris resident found it odd when he saw that the status of his Foodpanda order had been marked as 'delivered' even though no one rang the doorbell to pass him his food.

He was shocked when he saw that the food had been left at his gate with its contents spilt.

Cchang said: "The status of our Foodpanda order was subsequently stated as 'delivered', but we had been waiting at home to receive it and the doorbell never rang.

"I decided to open my front door to check if anything had been left outside. My family has a basket hanging on our gate and I saw that the bag of food had simply been thrown inside.

"When I took out the bag, I realised that something was wrong and turned it around to check.

"To my horror, I discovered that the delivery rider had left boxes of spilt food at my gate!"

Photos that Cchang shared with Stomp show how the boxes used to store his food were open. Rice and vegetables can be seen lying in the plastic bag, outside the boxes.

Cchang added: "We tried calling Foodpanda but to no avail, so we called the restaurant instead and they acknowledged the complaint.

"We believe that the food delivery rider was responsible for the spilt food.

"As the bag looked like it had been dropped on the floor, we decided not to take any chances and discarded the whole thing."

The Stomper said that he was given a full refund by Foodpanda last week.

Foodpanda did not respond to Stomp queries by press time.

This is not the first time a Foodpanda customer has reported receiving spilt food.

In August last year, a Facebook user shared how two attempts to deliver her food both ended in spillage and caused her shoes to be ruined.

In May 2018, Foodpanda issued a refund and compensation voucher to a Stomper who received an order of ramen with most of the soup spilt in its bag.

Related Stories
Foodpanda offers refund and voucher to customer who received ramen with soup spilled in bag
Foodpanda user gets Twelve Cupcakes order for Mother's Day cake cancelled at last minute
Foodpanda cancels order at the last minute, even though it has 3.5 hours to do it
More About:
foodpanda
bad service
food