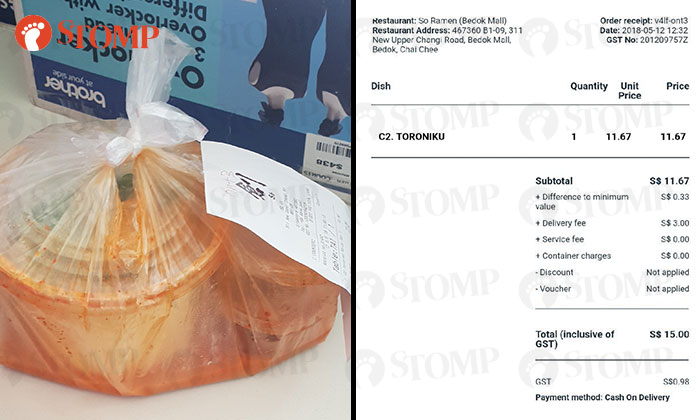 Foodpanda has issued a refund and compensation voucher to a customer who received an order of ramen with most of the soup spilled in its bag.

Stomper Jaymi told Stomp that he was disappointed upon receiving the toroniku ramen which he had ordered using the Foodpanda app on Saturday afternoon (May 12).

Most of the soup had been spilled.

Jaymi took a photo of the bag and sent it to Stomp.

According to Jaymi, he had placed an order with the Sō Ramen branch at Bedok Mall at 11.45am on Saturday using the Foodpanda app.

The deliveryman reached their doorstep at 12.45pm, about 20 minutes after the estimated arrival time.

Jaymi said that it was not the first time that he had placed orders using the app, and he had a practice of checking the food before paying the deliveryman.

However. he had forgotten to do so in this case, simply handing over $15 to the deliveryman.

When he realised that most of the soup had been spilled, the deliveryman was already gone.

Jaymi’s father subsequently called the Sō Ramen branch but was allegedly told that nothing could be done.

“Here’s an advice to people who order food online.

“Be careful to check your food before the delivery guy leaves as he might be dishonest.

“This is just disappointing.”

In response to a Stomp query, Foodpanda said in an official statement:

"We are sorry to hear that a customer ordering from Sō Ramen Bedok had a bad experience.

"On this occasion, we offered the customer a refund for the spilled ramen plus a compensation voucher for the inconvenience caused.

"We have also reached out to the restaurant to discuss optimum packaging arrangements for future food deliveries."

Stomp subsequently contacted Jaymi's father, who said he received a call from the Sō Ramen branch more than half an hour after the incident and declined its offer of a refund.