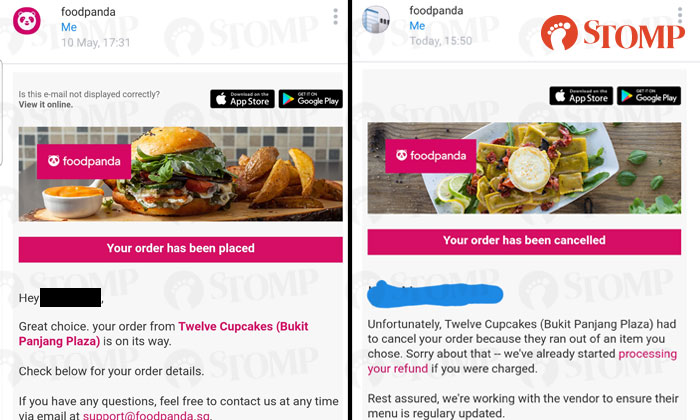 Stomper N had ordered a whole cake from Twelve Cupcakes at Bukit Panjang Plaza via Foodpanda two days before Mother's Day (May 12) for a family celebration.

However, he was dismayed when he found out the order had been cancelled just 10 minutes before it was scheduled to arrive.

"I placed an order on Friday (May 10) for a whole cake delivery on Sunday at 4pm," he said.

"At 3.50pm on Sunday, I received an email saying the vendor had run out of the item I chose and that the order had been cancelled.

"What utter nonsense, it is not professional at all."

It is unclear why the cake N had chosen was not reserved in advance since he placed the order two days before he needed it or why neither Twelve Cupcakes nor Foodpanda updated him earlier so he could have made alternative plans.

N updated Stomp on Wednesday (May 15) that Foodpanda has since apologised to him for the issue and offered him a $20 voucher via a web chat.

In response to a Stomp media query, a Foodpanda spokesman said: "At foodpanda, it is important to us that every customer has a positive experience, and we take any incidents seriously.

Previously, Foodpanda apologised to another Stomper whose order was cancelled just 15 minutes before it was scheduled to be delivered even though she had made the order more than three-and-a-half hours in advance.

Related Stories
Foodpanda cancels order at the last minute, even though it has 3.5 hours to do it
Foodpanda offers refund and voucher to customer who received ramen with soup spilled in bag
Woman in Singapore gets charged $48.50 for Deliveroo order in the UK she didn't make
More About:
foodpanda
bad service