Foodpanda cancels order at the last minute, even though it has 3.5 hours to do it 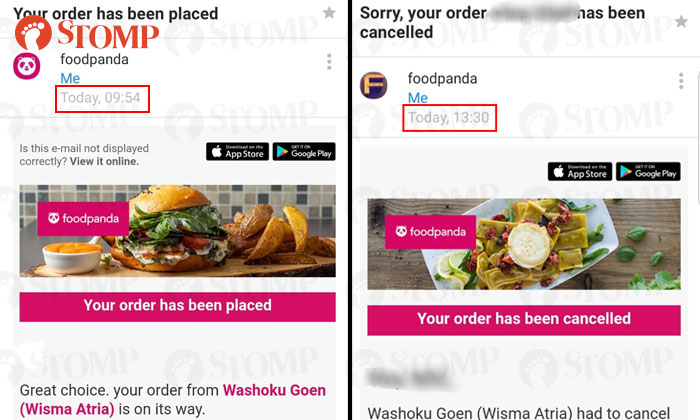 Have you ever waited hours for your food to be delivered to you only to have your order cancelled at the last minute?

That is what happened to Stomper Vanessa who ordered her lunch in advance from Washoku Goen at Wisma Atria via Foodpanda's food delivery app on Tuesday (May 7) at about 9.54am.

When her meal had not arrived at her Newton address by 1.55pm, she became concerned.

She then checked her email and was shocked to find her order had been cancelled at 1.30pm, just 15 minutes before the scheduled delivery time.

She told Stomp she was disappointed with the last-minute cancellation.

"I gave Foodpanda three-and-a-half hours reaction time but they only gave me 15 minutes notification.

"To add salt to the wound, the email asked me to re-order.

"Would they have been able to deliver a new order by 1.45pm?

"If the time was too short, wouldn't it have been polite of Foodpanda to give me a call to notify me instead of expecting me to check my email every minute?

In response to a Stomp media query, a Foodpanda spokesman said they have since apologised to Vanessa and offered her compensation.

"Customer satisfaction is of the utmost priority to us," the spokesman said.

"We have spoken with this customer, extended our sincere apologies for the inconvenience caused and offered her compensation accordingly."

Related Stories
Foodpanda offers refund and voucher to customer who received ramen with soup spilled in bag
Woman in Singapore gets charged $48.50 for Deliveroo order in the UK she didn't make
Man waits over 2 hours for Deliveroo to send him his Sakae Sushi dinner -- that never came
More About:
foodpanda
delivery
food delivery
bad service