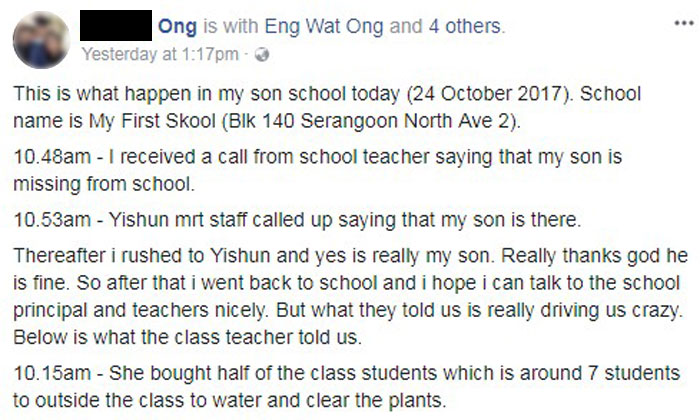 New information unveiled by the parents of the autistic boy has shed light on the sequence of events that transpired on the day of the incident.

According to Ms Ong, the mother of the child, the director of the preschool had shown them closed-circuit television (CCTV) footage, and told them that the boy had been involved in a gardening activity at 9.45am, instead of the 10.15am as told by the teacher earlier.

When the students returned back to their classroom at 10.02pm, CCTV footage showed that the boy did not return with them.

At 10.03pm, the teacher in charge of the gardening activity realised that the boy was missing and activated the staff wishing the school to look for him.

A school teacher later called Ms Ong at 10.48am to inform her of her child’s disappearance.

Fortunately, less at 10.53am, Ms Ong received a call from Yishun MRT Station staff member saying that her son was there.

Apparently, he had taken bus service 73 to Ang Mo Kio MRT Station, before boarding the train to Yishun MRT Station.

After the event, Ms Ong confronted the school, and the teacher admitted that he might have remembered the time of the events wrongly.

The teacher subsequently apologised to Ms Ong and her family.

However, Ms Ong is unconvinced, citing that this was not the first time her son had been involved in an incident at the pre-school.

Such incidents started only this year, Ms Ong told Stomp, and there have been three cases thus far.

“This is a nightmare for us.

“I almost lost a kid.

“I don’t know how he managed to take the buses or train without an EZ-Link card either since I kept his card with me.

“We don’t know how we can accept her apology.”

It is understood that Ms Ong’s son also attended special classes by the Asian Women’s Welfare Association (AWWA) twice a week in addition to his attendance at My First Skool.

Ms Ong’s son has been attending My First Skool pre-school for more than five years, from when he was two years old.

However, he has stopped attending the pre-school since.

With two months more until he can start his primary school education in Pathlight School, Ms Ong is uncertain of their short-term plans.

“It is hard for us to find a school at such a short notice.”

My First Skool has issued an apology in response to a Stomp media query after an autistic boy went missing from one of their pre-schools at Block 140 Serangoon North Avenue 2 yesterday (Oct 24).

Stompers Pinky and Kris alerted Stomp to a post by Facebook user Ms Ong recounting how stressed she was when she found out her son was missing.

She received a call from a school teacher at around 10.48am telling her what had happened.

Thankfully, at 10.53am, she received a call from a Yishun MRT Station staff member that her son was there.

She rushed down to the station immediately and was overcome with relief to find him there, safe and sound.

She then went back to the school to find out what happened but said that what they told her drove her "crazy".

She wrote that the teacher said she had brought seven of her students, or half of the class, outside to water and clear some plants at 10.15am.

She then said at 10.30am all students returned back to the classroom.

She discovered that Ms Ong 's son was missing at 10.31am.

Ms Ong was confused and felt that the timing did not make sense.

She then said that the principal told the teacher to "think carefully" and that the teacher replied that she might have remembered the time of events wrong.

Ms Ong was furious and told them off.

She wrote in her post that some may think that her son is old enough to know better but she put out a reminder that he is autistic and that he has been with My First Skool since he was a toddler.

She said that the school and its staff should have been aware of his situation.

She added that she told her son to apologise to the teachers as it is "wrong to run away from school".

"We apologise unreservedly for this incident which has caused great stress and worry to the family of a child under our care. The boy has been with us since he was a toddler and our teachers have always conscientiously looked out for him. Upon discovering that the child was not with his classmates yesterday morning during a gardening activity, the teachers at the centre did their best to search for the child in the vicinity of the centre, before the teacher in charge of the gardening activity contacted the parent. The teacher-in-charge is deeply apologetic and badly shaken by this incident. She is being counselled and understands that appropriate disciplinary action will have to be taken. We are doing our utmost to engage with the parent on this incident."