Mum lashes out at tutor after she asks for payment, calls her desperate 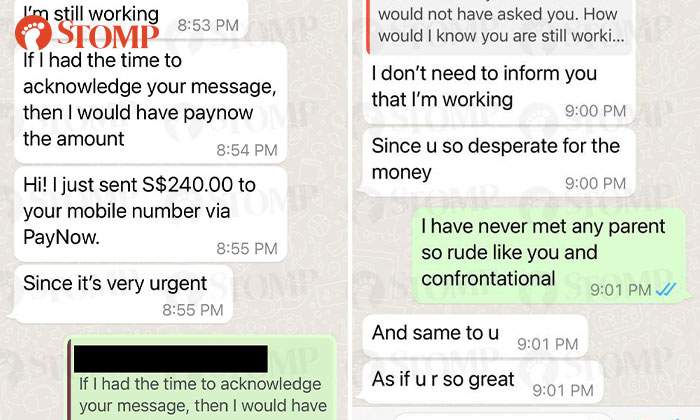 When a private tutor asked a parent to acknowledge her message regarding payment of tuition fees, she did not expect to be met with hostility.

Stomper Mary shared with Stomp screenshots of the text exchange she had with the mother of one of her tutees that started after asking her if she had received her invoice.

"The payment as agreed is on the last lesson of the month," said Mary.

She had sent a message regarding payment at 5.50pm. After no reply she sent another message at 8.49pm, acknowledging that the other woman may have overlooked the message.

However, the parent told her she was still working and that if she had the time to acknowledge the message she would have paid her via PayNow.

She immediately transferred the $240 in fees and texted: "Since it's very urgent".

Mary told the woman she would not have asked if she could read her mind.

She said: "How would I know you are still working if you did not inform me???"

She added that most of her students' parents have acknowledged her messages over the years.

"It's not a matter of urgency," she said.

"It's just a courtesy to acknowledge so that the sender will know right?"

The parent promptly informed her that she wished to discontinue her son's tuition, the one thing both parties agreed on.

The mother then told Mary: "I don't need to inform you that I'm working.

"Since [you] so desperate for the money (sic)."

When Mary said she has never met any parent as "rude and confrontational" as her, she responded: "And same to [you].

Mary told Stomp: "I would like to caution other private tutors about her unreasonable and absurd behaviour.