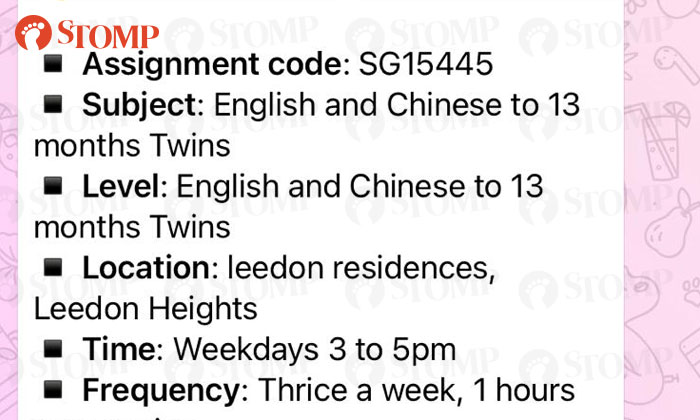 A parent posts an advertisement looking for a tutor to teach her children – a pair of twins – English and Chinese languages.

The lessons are to be held for an hour, three times a week at Leedon Residence, a condominium in District 10, in the Holland Road area.

On the face of it, this was not unusual, but when a screenshot of the advertisement was posted on citizen journalism portal Stomp last week, it sparked a lively discussion.

The reason? The twins are only 13 months old.

The New Paper could not reach the tuition agency for comment, but others in the industry suggested some reasons why parents could be looking for help for children so young.

Referring to the particular advertisement, Mr Soh Chong Kian, chief executive of Tenopy, a provider of online tutoring classes, said: "The parent is probably looking for someone well-versed in the languages to expose the children to hearing the language."This recent case is not an isolated one, it seems.

Founder of SmileTutor Tuition Agency Rum Tan had come across a case of a mother requesting a Chinese tutor to teach her three-month-old baby.

"Her intention was for the tutor to speak to her baby in conversational Mandarin. She wanted her baby to pick up the language, but she did not have the time to teach," he said.

Though rare, the request was not unreasonable, Mr Tan added.

"It would make sense to give your baby exposure to a language they would otherwise not be exposed to, for example, if no one in your family can speak it properly."

Some netizens, however, labelled the parent in the advertisement "kiasu" and "crazy".

One netizen went as far as saying: "It's parents like (these) that break their kids emotionally and physically."

Experts TNP spoke to though, said there are merits to engaging children with language at a young age.

Mr Matthew Scott, head of the Young Learners at the British Council, said: "The amount of language that a child absorbs is influenced by the environment in which they are brought up.

"The child will initially understand more than they can speak. In their first year, they will produce mostly babbling sounds and imitate what is being said to them.

"After this, they will begin to develop their vocal cords and start to experiment more with different sounds from the world around them."

Engaging children at that age in play and talking about what they are doing with their toys is key to developing language skills, said Mr Jason Teo, director of training and development at enrichment centre, Singapore Brain Development Centre.

However, he cautioned parents against passing the responsibility to others in the child's early years.

Mr Teo said: "The process should not be treated simply as an academic exercise. Parents cannot outsource the responsibility of their children's core emotional needs of relating and belonging. Only when children sense this as they are learning, can it be effective."

It is parents' intention that is important, said Ms Kimberly Chew, a psychologist at Annabelle Psychology.

Ms Chew, who works closely with children and adolescents, said: "If parents are driven by fear and want to start preparing their children for primary school from the get-go, it will not be helpful for them.

"Enforcing the notion that academics is so important at such a young age - especially as a substitute for playtime - could lead to mental health or self-identity issues in the future."