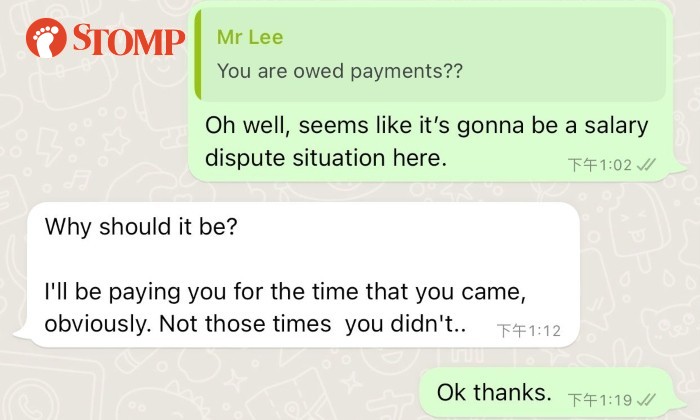 A father of a St Joseph's Institution Junior Primary 4 pupil is accused of not paying a private tutor for tuition services.

A Stomper said that she is owed $195 in tuition fees and shared screenshots of the WhatsApp chat between the father and her.

In the messages, the father said: "I'll be paying you for the time that you came obviously. Not those times you didn't."

The tutor, who taught Chinese and mathematics, replied: "I'm not keen in arguing with you. Please make the payment before the end of July and may you find a suitable tutor."

On Aug 1, the Stomper messaged the father again: "Please make payment for the lessons in the first three weeks of July which I had come."

After the father did not reply, the tutor sent a copy of a police report dated Aug 2 with the message: "I've launched a police report. He can choose to continue to ignore or make the payment right now. How embarrassing as he is a fully grown man."

The Stomper later sent a notice of consultation at the Small Claims Tribunal.

When asked by Stomp why the father refused to pay, the tutor said: "Because we ended on an unhappy note where I told the father the student was misbehaving so much. The father thought I should just bear with it. We didn’t agree on that, but we agreed to end my tuition service. And he just didn’t pay for the rest of the sessions which I turned up for."