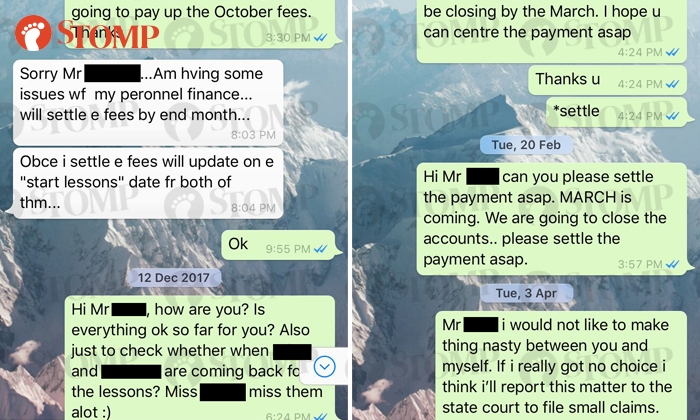 A man who said he needed more time to make full payment for his two children's tuition fees has failed to respond to the education centre's messages and calls for the past few months.

Stomper E told Stomp that he has been running the education centre, which is located in Toa Payoh, ever since taking over the reins in January 2016.

The man had been a long-time customer since June 2014, when he sent his eldest child for tuition there.

In 2016, the man was sending his two younger children, both of whom are in primary school, for tuition in various subjects, in addition to day-boarding on Mondays to Fridays.

E said: "His first year with me was fine and payment was always prompt.

"In 2017, he started delaying payment. Instead of paying at the start of the month like he was supposed to, he would only pay at the end of the month.

In October 2017, the man was issued an invoice stating that he had to pay $1,199.90 to the tuition centre for that month's services.

However, the man only made a partial payment of $800, citing that he had "issues" with his "personal finances" but did not elaborate further.

Despite repeated texts and reminders from E over the next several months to pay the remaining sum of $399.90, the man did not do so.

In their final correspondence, the man said he would make the payment by Jan 23 latest -- but went MIA after that. He stopped responding to messages, while calls went unanswered.

E added: "I was left with no choice but to file a small claims, and he refuses to settle the fee even now, after being informed of the claim."

According to E, the man was issued a Notice Of Consultation to show up at the State Courts' Small Claims Tribunals on July 16.

"I am not sure if he will even turn up," said the Stomper, who still wishes the matter can be settled privately and amicably.

View more images of their conversation in the gallery.

Related Stories
Man immediately receives contest prize owed to him for 2 months -- after telling Stomp about it
Cafe and potential employee exchange unfriendly texts after dispute over work shifts
From bros to foes (kinda) after man refuses to return $100 that he borrowed
More About:
money
text
tuition centre
dispute