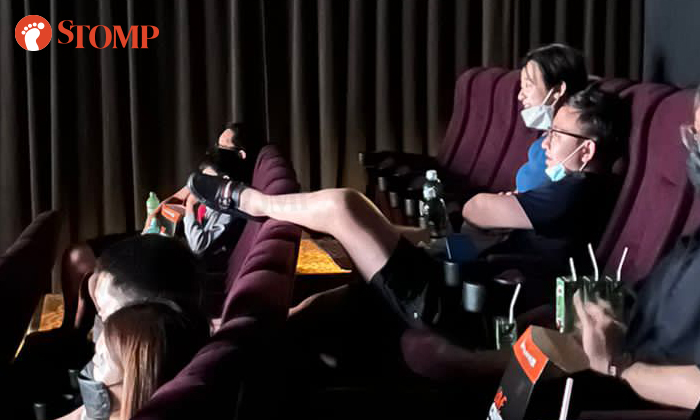 Dim lighting, air-conditioning and cosy seats in a cinema might leave you feeling like you are right at home.

A man, however, was seen making himself too comfortable in a Golden Village (GV) cinema hall at Suntec City on Sunday afternoon (Aug 14).

Stomper Tommy spotted the man with one leg propped up on a cinema seat in Hall 6 at around 3.30pm and said the sight left him with a "bad feeling".

Sharing photos of the incident, Tommy added: "We only noticed it when the movie credits rolled. No one else reacted but I find this ridiculous."

Earlier in May, a woman was called out for leaving a mess at GV Tampines in a Facebook post that has been shared over 1,000 times.

In July 2020, a Stomper saw a fellow patron propping his bare feet up on a seat at GV Bishan and reported the matter to staff.

A GV spokesman had told Stomp in response to the 2020 incident: "Since 2015, Golden Village has run several cinema etiquette campaigns through pre-show screen advertisements reminding our patrons to be considerate to other movie-goers in movie theatres.

"We currently showcase a number of recent cinema etiquette videos on GV screens by the Singapore Kindness Movement.