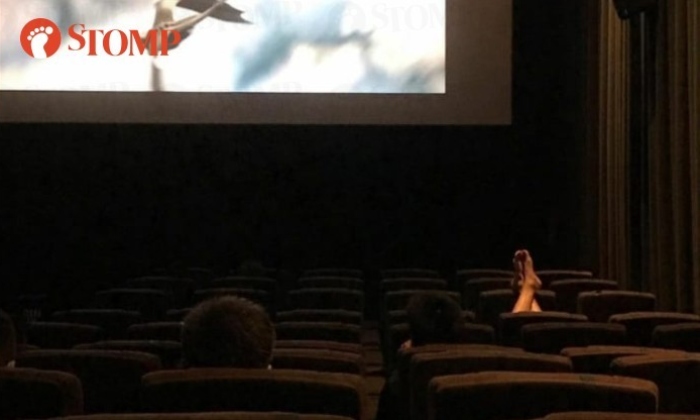 Imagine enjoying a movie when a person in front of you lifts his feet up and rests them on a cinema seat.

Surely, it is not a sight for sore eyes.

Stomper Joe had booked tickets to see Peninsula, the sequel to Train to Busan, at Golden Village (GV) Junction 8 on Sunday (July 19) at around 3pm when he spotted a man a few rows in front of him propping his feet up onto a cinema seat.

The Stomper shared: "I feel that the person is really inconsiderate and entitled.

"I reported the incident to the staff members at GV, and they instructed him to put his legs down," he said.

In response to a Stomp query, a spokesman from GV said: "Since 2015, Golden Village has run several cinema etiquette campaigns through pre-show screen advertisements reminding our patrons to be considerate to other movie-goers in movie theatres.

"We currently showcase a number of recent cinema etiquette videos on GV screens by the Singapore Kindness Movement.