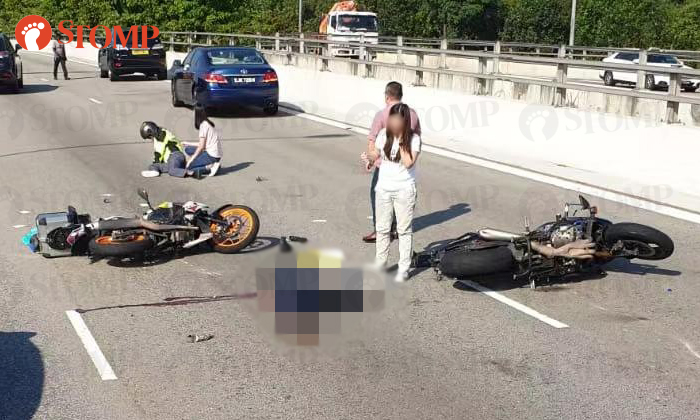 An accident involving two motorcycles, one car and one trailer along the Kranji Expressway (KJE) on Friday morning (March 15) left one man dead and another injured.

The police told Stomp in response to queries they were alerted to the accident, which occurred towards the Pan-Island Expressway (PIE) after the Sungei Tengah exit, at 9.21am.

A 33-year-old motorcyclist was conscious when taken to Ng Teng Fong General Hospital.

The other motorcyclist, a 25-year-old man, was pronounced dead by paramedics at the scene.

The car driver, 23-year-old woman, and the trailer driver, a 57-year-old man, are currently assisting with police investigations.

Circulated photos contributed by Stomper Frederick and Rohaizat show a motorcyclist lying face-down on the road, near a trail of blood.

Two motorcycles lying on their side can also be spotted at the scene.