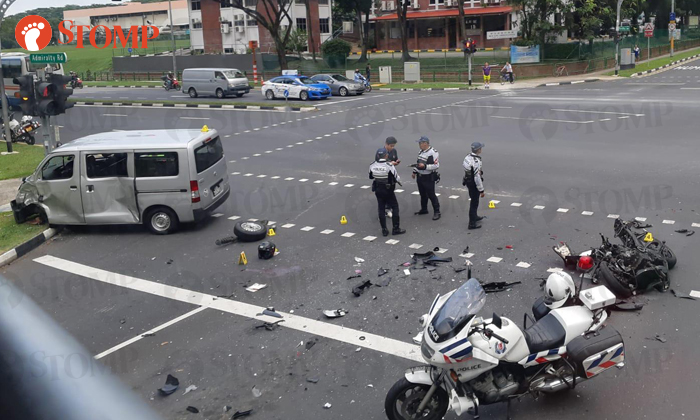 A 23-year-old motorcyclist died in hospital after getting into an accident with a van at the junction of Marsiling Lane and Admiralty Road on Sunday afternoon (Dec 23).

In response to a Stomp query, the police said they were alerted to the accident at 4.08pm.

The motorcyclist was unconscious when taken to Khoo Teck Puat Hospital, where he subsequently succumbed to his injuries.

Stomp understands that he suffered a traumatic cardiac arrest.

Stomper Ah Boy alerted Stomp to circulated photos of the accident, showing the mangled motorcycle lying on the road.

The van, which had a damaged front bumper and a dented side, can be seen mounting a kerb.

Debris was strewn all around the road while a dislodged wheel and a helmet lay near the van.

Stomper Grace also contributed a picture that she took from her residential unit.